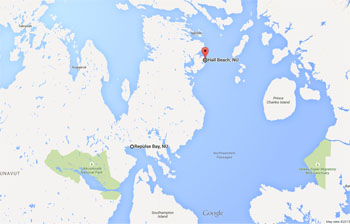 Search and rescue crews from across the Baffin and Kivalliq regions have been searching the trail between Hall Beach and Repulse Bay for Brian Koonoo, a Parks Canada employee who has been missing since May 15. He walked into Repulse Bay early May 20. (GOOGLE MAPS IMAGE)

Brian Koonoo, a Parks Canada employee from Pond Inlet who has been missing since May 15, walked into Repulse Bay early May 20 after walking 57 kilometres over three days, one of his friends said on Facebook.

“Brian is fine! He’s at my house now,” Monty Yank, another Parks Canada employee, said in a Facebook post.

The 35-year-old Pond Inlet man left Igloolik by snowmobile May 12, stopping briefly in Hall Beach the same day, en route to Repulse Bay to hunt caribou in that region.

When Koonoo didn’t show up as expected May 15, neighbouring communities began sending out ground searchers, while the Joint Rescue Coordination Centre in Trenton sent a Hercules from Winnipeg to fly over the region May 17 and May 18.

Since then, a new crew of searchers from Pond Inlet began another aerial search based out of Hall Beach, where rescue efforts were coordinated.

Drifting snow had a big impact on visibility over the past weekend, as Hall Beach search and rescue spokesman Solomon Nasook then told Nunatsiaq News, although new groups of ground searchers left to look for the missing man May 19.

Nasook said he was told Koonoo was well-equipped, although he did not purchase more gas for his snowmobile when he stopped in Hall Beach.

Search and rescue crews, both ground and aerial, had been searching the roughly 250-km long trail that connects Hall Beach to Repulse Bay, Nasook said, along with an area of about 24-km on each side of that trail.