Japan promotes its bid for observer status at the Arctic Council 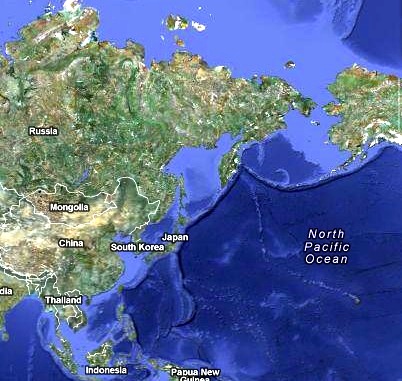 This Google map shows the location of Japan, located about 5,400 kilometres southwest of Alaska.

Japan has no Arctic territory, but on March 19 Japan appointed an Arctic ambassador — a move intended to prepare Japan for admission to the Arctic Council as a permanent observer.

The position of Arctic ambassador is a new one.

Japan has applied for permanent observer status in 2009.

And it’s among 14 states and organizations, which have applied for observer status, including South Korea, the European Union, China, India, Greenpeace and the Association of Oil and Gas Producers.

Created in 1996, the Arctic Council is tasked with promoting cooperation, coordination and interaction among Arctic states.

The Arctic Council already has six “observers,” including France and Germany, whom council members have decided can contribute to their work.

A decision on who gets in will be made in May just before Sweden hands over the chair of the Arctic Council to Canada at a ministerial meeting in Kiruna in northern Sweden.

But Japan already has its foot in the Arctic Council’s door, judging from a document available on the internet, called a “written statement by the Delegation of Japan at the Second Meeting of Deputy Ministers of the Arctic Council 15 May 2012

The statement notes that since submitting its formal application for the observer status in the Arctic Council in June 2009, Japan, as an ad-hoc observer, has attended all meetings of senior Arctic officials, the deputy ministers Meeting in 2010, and the ministerial meeting which took place in Nuuk in 2011.

Japanese experts also participated in meetings of the working group of the Arctic Monitoring and Assessment Programme in February 2010 and October 2011, as well as in other “relevant meetings.”

In favour of its observer application, the statement says that Japan now has a “Consortium for Arctic Environmental Research,” with about 300 researchers.

The consortium will address long-term Arctic environmental research planning, human resource development, and community outreach inside and outside Japan.

“As demonstrated by this background, Japan wishes to assure the Council that it has the determination and ability to make useful and substantial contributions to the work of the Council as a permanent observer,” Japan said in 2012.