“The military has no business marketing to children” 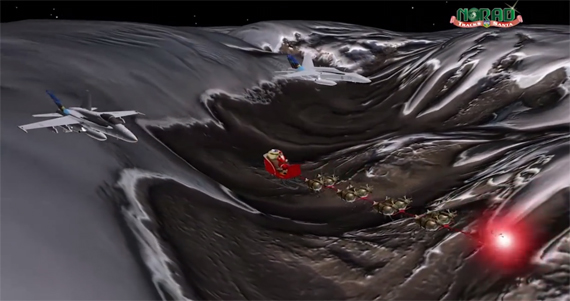 This year, it looks like Santa’s sleigh will be guided by more than just eight reindeer and Rudolph’s shiny nose.

And that’s a move that has created controversy this year from an American children’s advocacy group.

The Boston-based Campaign for a Commercial Free Childhood says the video brings militarism and violence to an otherwise peaceful family tradition.

“It’s a backdoor way to market to children, and the military has no business marketing to children,” campaign spokesperson Josh Grolin told CNN earlier this month.

NORAD, which monitors Canadian airpsace, has since downplayed the controversy, noting the jets are unarmed and insisting the video is safe and non-threatening for children to watch.

NORAD and its predecessor, the Continental Air Defence Command has tracked Santa’s Christmas journey for more than 50 years.

The tradition begin in 1955 after a Colorado Springs-based company misprinted a phone number for children to call Santa Claus in one of its advertisements.

Instead of reaching Santa, the phone number put calls through to CONAD’s operations hotline.

The director at the time has his staff check the radar for indications of Santa making his way south from the North Pole, and a tradition was born.