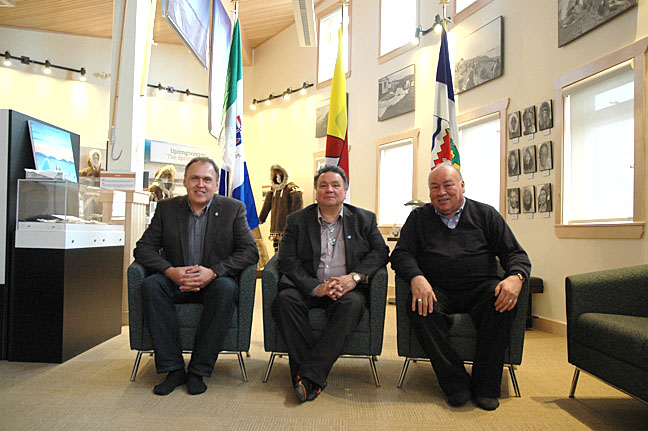 Yukon Premier Darrell Pasloski, left, Nunavut Premier Peter Taptuna and Northwest Territories Premier Bob McLeod at the Northern Premier’s Forum in Kugluktuk on June 16, 2015. The three premiers, ahead of a meeting March 3 between Prime Minister Justin Trudeau and the country’s territorial and provincial leaders, say they want help with adaptation to climate change — but they don’t like carbon pricing. (FILE PHOTO)

Led by Yukon Premier Darrell Pasloski, the premiers of the three northern territories issued a joint statement March 2 saying they’re opposed to the use of a carbon tax to fight climate change.

“I believe a carbon tax would have a negative impact on quality of life in the North. Canada’s climate change goals must be conducted in a way that does not significantly impact northern costs of living, undermine food security or threaten emerging economies,” said Pasloski, who ran as the Conservative candidate for Yukon in the 2008 territorial election.

Though Pasloski did not win the Yukon seat that year, the Conservatives won the 2008 election after exploiting populist opposition to the Liberal party’s Green Shift carbon tax proposal, an idea that has since disappeared from the party’s platform.

The three premiers released their statement just prior to the start of a meeting in Vancouver March 3 between Prime Minister Justin Trudeau and Canada’s provincial and territorial premiers aimed at working out a national strategy on climate change.

But if territorial leaders and some provincial premiers get their way, that strategy will not include putting a price on climate-warming carbon dioxide emissions.

Saskatchewan Premier Brad Wall, who faces a provincial election in April, has said in recent media interviews that he’s also adamantly opposed to a carbon tax.

So for that reason, the three northern premiers want help adapting to climate change — but also believe that raising the price of GHG emissions by way of a carbon tax will damage northern economies.

“This is why we place a heavy emphasis on mitigation and adaptation, and we need other jurisdictions to understand the unique circumstances in the North and the impacts it could place on our limited economy by remaining especially flexible in any action plan on climate change,” Taptuna said.

This past Feb. 17, The Globe and Mail, citing anonymous federal government sources, reported that the Trudeau Liberals are seeking a deal under which the provinces and territories would agree to a minimum national carbon price of $15 a tonne.

But Catherine McKenna, the federal environment minister, said in an interview with Canadian Press last week that putting a price on carbon emissions is “really important” — but only one measure among many and that the final price has yet to be determined.

The idea of making individuals and companies pay more for energy products derived from fossil fuels is considered by many economists and businesses as an efficient way to nudge people away from fossil fuels and provide an incentive to develop alternative energy technologies.

One way is a direct tax on fossil fuel products. Another is the development of cap-and-trade markets in which large emitters are penalized for exceeding emissions caps and can buy credits from others who emit less.

A recently implemented cap-and-trade system between Quebec, Ontario and California has led to an increase of about four cents a litre in gasoline prices in Ontario.

Northern premiers don’t like those kinds of ideas. They want help with adaptation to climate change, but they’re nervous about measures that could add to the cost of doing business in the North.

“Northern premiers want to ensure that detailed economic assessments are completed on any new national initiatives on climate change, including analysis specifically on possible impacts to territorial economies,” their joint statement said.

“We are looking forward to working with the federal government to ensure Canada’s national approach to climate change complements our territorial strategies,” McLeod said.

During last year’s election campaign, the Trudeau Liberals promised to create a “pan-Canadian framework on climate change” within 90 days of taking office.

But now, it’s more likely that the March 3 federal-provincial-territorial meeting will result in the creation of a set of working groups that will report back in about six months.

On March 2, Trudeau held a climate change meeting with leaders of Aboriginal organizations: the Assembly of First Nations, Inuit Tapiriit Kanatami and the Métis National Council.