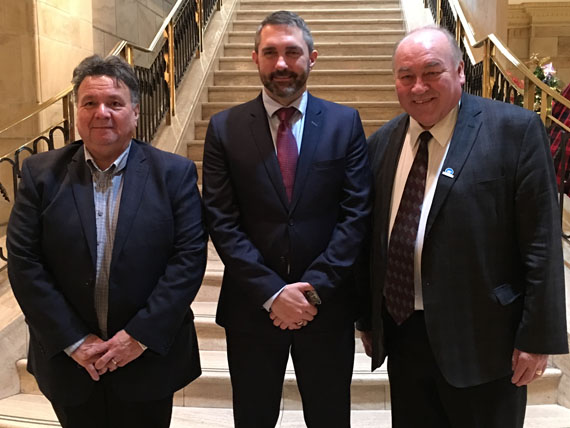 The premiers of Canada’s three territories, Peter Taptuna of Nunavut, Sandy Silver of Yukon and Bob MacLeod of the Northwest Territories, met last week in Vancouver in a meeting that coincided with a major mining conference, the AME 2017 Mineral Exploration Roundup, which ran Jan. 23 to Jan. 26. They all said they want a say in Prime Minister Justin Trudeau’s new Arctic policy. (PHOTO COURTESY OF THE GN)

The northern premiers’ meeting in Vancouver coincided with a major mining conference, the AME 2017 Mineral Exploration Roundup, which ran in Vancouver from Jan. 23 to Jan. 26.

The three premiers also appear to be directing their remarks to Trudeau’s federal government, which promised last Dec. 20 to create a new “Arctic Policy Framework” to replace the Harper government’s Northern Strategy and Arctic foreign policy.

“It’s critical that any new policy framework that specifically addresses the Arctic must involve and have input from Northerners and the three territorial governments. Our meeting reaffirmed and reiterated that point,” Nunavut Premier Peter Taptuna said in the joint statement.

• the new Arctic policy will be co-developed with Indigenous, territorial and provincial partners;

• the federal government will engage Indigenous and Northern communities in developing a governance model for northern marine transportation corridors and Arctic marine shipping in a way that is environmentally and socially responsible, including respecting modern northern treaties; and,

• a one-year consultation with companies that hold existing offshore oil and gas rights in the Arctic.

“Territorial and affected provincial governments (Newfoundland and Labrador, Quebec & Manitoba) and Indigenous groups with asserted or established rights in the Arctic region, including National Indigenous Organizations. Many federal government departments will also be involved in this process,” the background document says.

Two of the three territorial premiers, Taptuna of Nunavut and Premier Bob McLeod of the NWT, said in December that they’re disappointed at Trudeau’s offshore oil and gas ban and upset that the prime minister didn’t consult them before announcing the decision.

The premiers’ meeting also took place less than two weeks before Trudeau is set to visit Iqaluit Feb. 9, with other northern stops possible during the northern portion of his town-hall style tour of the country,

During their meeting, the premiers reaffirmed their support for mining and their commitment to a “robust, sustainable economy in the North,” the release said.

They also said they would co-operate on a pan-territorial vision for ongoing growth and development, with the NWT taking the lead on developing a “sustainable development strategy”

That will “help ensure that Northerners have a strong, collective voice in ongoing discussions about the future of the North and have a role in shaping any decisions affecting the North and its people,” the premiers said.

Premiers also said they would work with Indigenous peoples in their territories to develop a common set of values and principles for their new pan-territorial northern policy.

Although the new release contained no detail on what that would touch on, it’s likely to deal with issues such as communications, infrastructure, and climate change adaptation.