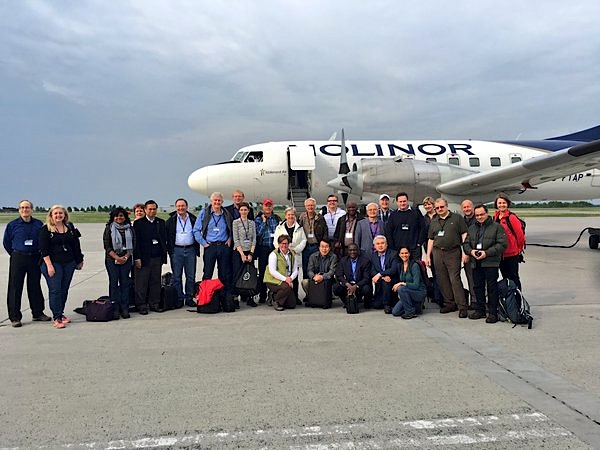 In this photo, widely posted on Twitter, more than 20 ambassadors, high-ranking diplomats and officials stand May 29 in front of the Nolinor/Kitikmeot Air charter which will take them from one end of the Arctic to the other during a nine-day northern tour. In Cambridge Bay, the Ambassadors will visit the site of the Canadian High Arctic Research Station, now under construction. (PHOTO BY JANE GEORGE) 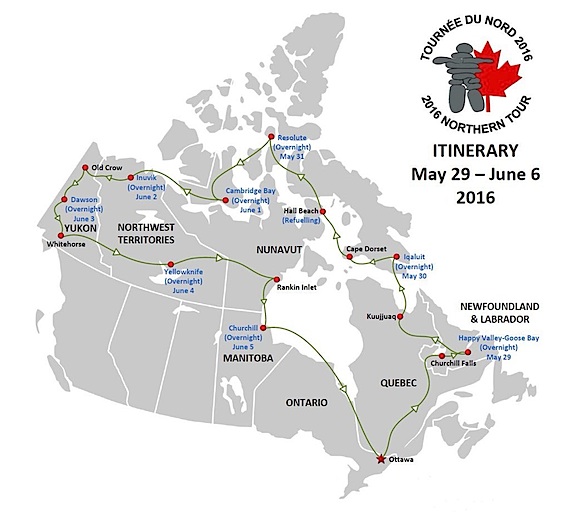 This map shows the route of the 2016 Northern Tour. (HANDOUT MAP)

This week, if you live in northern Canada you may cross paths with a group of dignitaries —  including ambassadors, top-ranked diplomats and federal civil servants — who have started a northern tour in which they’ll travel more than 10,000 kilometres between May 29 and June 5, from Happy Valley-Goose Bay to Churchill.

“I’m very excited to have this opportunity to participate in the northern tour,” United States Ambassador Bruce Heyman told Nunatsiaq News before the May 29 startup of the tour through the three territories and Nunavik.

“During my time in Canada, I’ve visited every province and territory. I’ve been north of 60 previously, but have not had the pleasure to travel this extensively throughout the region and to see so many different locations.”

Heyman, who packed a lot of sunscreen to deal with the 24-hour sunlight in some places, said he was “looking forward to learning more about the North by interacting with northerners.”

For Heyman, it’s an important trip for the U.S., which now chairs the Arctic Council.

“People don’t always think of the U.S. as an Arctic nation, but we certainly are, and we place a great importance on the Arctic region,” he said.

“When Secretary of State [John] Kerry traveled to Iqaluit in April 2015 to assume the chair, he laid out an ambitious agenda that will have long-term, positive impacts for the region.”

Barack Obama became the first sitting U.S president to visit the Arctic, when he travelled to Anchorage, Alaska on Aug. 31, 2015.

“The president and the prime minister called on all Arctic nations and those with Arctic interests to embrace a new future for Arctic leadership, with four objectives: conserving Arctic biodiversity, incorporating Indigenous science and traditional knowledge into decision-making, building a sustainable Arctic economy, and supporting strong Arctic communities,” Heyman said.

Some in Nunavut hope those objectives also include connecting Canadian Arctic communities to the internet via fibre optic cable through the Anchorage, Alaska-based Quintillion Subsea Holdings, which plans to build and operate the same type of fibre optic network through the Northwest Passage.

Quintillion is now focused on its first phase, the Alaska segment of the project, with the segment through the Canadian Arctic listed as a distant phase three.

After a stop on Kuujjuaq May 30, the ambassadors will overnight in Iqaluit where the summer sitting of the legislative assembly gets underway during the afternoon of May 30.

The tour’s agenda until June 5 also includes a stop at Cape Dorset’s Kinngait Studio, an overnight at Resolute Bay’s Polar Continental Shelf Project and Arctic Training Centre and a visit to Cambridge Bay, home of the future Canadian High Arctic Research Centre and a gateway to the Northwest Passage where security and sovereignty issues are a shared concern of the U.S. and Canada.

The northern tour of the ambassadors, the first in three years, used to be a free, annual perk during an international head-of-mission job posting to Ottawa, but was cancelled in 2012 due to budgetary reasons.

The last tour took place in 2013 when 22 ambassadors of various countries took an eight-day tour of all three territorial capitals.

A statement on the renewed tour from Ottawa said “with this tour through three territories and three provinces, we advance Canadian foreign policy objectives related to environment and climate change, Indigenous Affairs and northern economic development.”