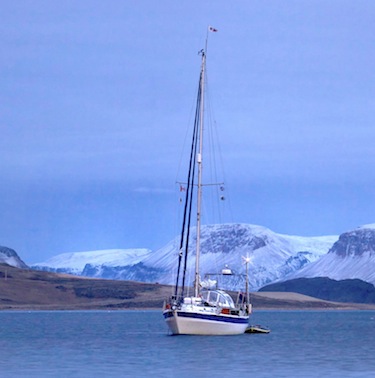 The Dodo’s Delight at anchor in Arctic Bay earlier this month. (PHOTO BY CLARE KINES) 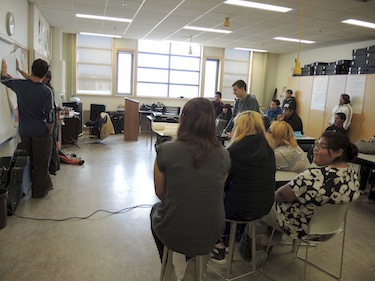 The crew of the Empiricus speaks to students at Kiilinik High School in Cambridge Bay. (PHOTO COURTESY OF EMPIRICUSEMBARKS.WORDPRESS.COM)

There’s one thing that felt good to British sailor Richard Nicolson when he landed at the Nunavut community of Arctic Bay after sailing through the Northwest Passage: a hot shower.

Earlier this week, Nicholson and the boat he sailed on — 10-metre fiberglass boat called Dodo’s Delight — left Arctic Bay for Greenland after a tough trip through the High Arctic islands.

But while the trip on board the Dodo’s Delight was straightforward, “you have to expect the worst,” Nicolson said Sept. 16 from Arctic Bay.

Its journey through the Northwest Passage included several days of waiting at Fort Ross where the crew of the Dodo’s Delight, along with other vessels, waited for a break in the ice and wind.

The entire transit was a kind of “hurry-up-and-wait” experience — and the enjoyment of the stopover at Fort Ross quickly got tired when the 48-hour wait turned into days.

But the question is why go for the tedium and danger of the Northwest Passage at all? Richardson said it’s the trip “you want to do” — and he was also raising money for the Ellen MacArthur Cancer Trust.

Richardson said he’s pleased that Dodo’s Delight is one of only about 120 smaller boats which have made it successfully through the Northwest Passage since Norwegian Roald Amundsen’s first transit in 1906.

This year’s crop of smaller craft attempting Northwest Passage included a group of unsuccessful sailors on jet-skis, who had to be rescued by the Coast Guard, and others in row boats and kayaks.

A sailboat, the Dax, ended up being deck-loaded at Clyde River aboard the MV Anna Desgagnés after an engine problem stopped its voyage.

And the crew of another 15-metre yacht, the Empiricus, decided to end their 2013 journey in Cambridge Bay earlier this month.

As for Empiricus sailor Jesse Osborn’s thoughts about why the Northwest Passage has become an increasing draw to sailors of small boats, he said on his blog that “somehow we modern ‘Explorers of the North’ have married ourselves to this concept that the passage itself [is] a Right Of Passage.”

“A hash mark for our sleeve. Global awareness? Or just a good excuse to do something crazy,” he says. “Whatever our motivations, I for one have been missing the point all along.

“We’re not doing anything new, that really helps anybody. We’re not carrying goods, or medicine, or knowledge, to those who don’t have it. We’re not profiting financially, nor are we setting records or proving the impossible as realistic. We are simply enduring challenging conditions in a remote area, where even the fattest wallet can’t float you to shore. Simply to pass on that we did it.”

Osborn said technologies like GPS, autopilot, and reliable diesel engines have helped recreational explorers venture into extraordinary places — and “public perception and media propaganda make the Arctic out to be a playground with some ice cubes.”

“If the Arctic was a shopping mall, we would not sprint through it from one end to the other,” said Osborn who, before he left Cambridge Bay, also spoke to high school students at Kiilinik High School about his experiences.

“I’m here to tell you that the Arctic is a shopping mall of experiences on a monstrous scale. This place is beautiful. From a grand scale to a microscopic one. From the culture and history, to the daily struggles and interactions, the Arctic is fascinating.  But most fascinating of all, are the people. Of all the crown jewels in the Arctic, the most looked over and ignored, are the people.”

While even the most hardy yachts (about 35 of all sizes, according to a blog on Northwest Passage traffic maintained by Doug Pohl, ) have now left the increasingly ice-filled Northwest Passage.

“This 2013 melt season has been a surprise,” said Pohl, who possesses more than years of experience with the United States Coast Guard as a master of ocean motor and steam vessel license,

“More ice formation than anytime since I’ve been following the Northwest Passage transits. More blockages, more icebreaker rescues, and more unprepared small craft than ever before. Anyone using a small craft like a rowboat or jet-ski to challenge the Arctic are out of their minds.”

However, a few other vessels, now mainly much larger icebreakers, are still sailing through the High Arctic islands even if the National Snow and Ice Data Center now says the Northwest Passage is closed by ice.

These ships include the ice-strengthened bulk carrier Nordic Orion, loaded with coal bound for Finland.