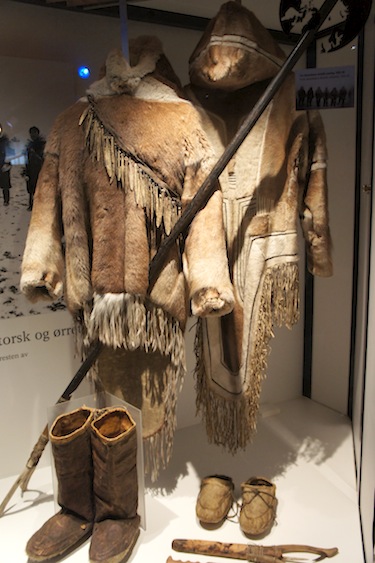 Here’s a look at some of the Netsilik clothing, collected by polar explorer Roald Amundsen, on display at the Fram Museum in Oslo, Norway. (PHOTO BY ALEX BOYD) 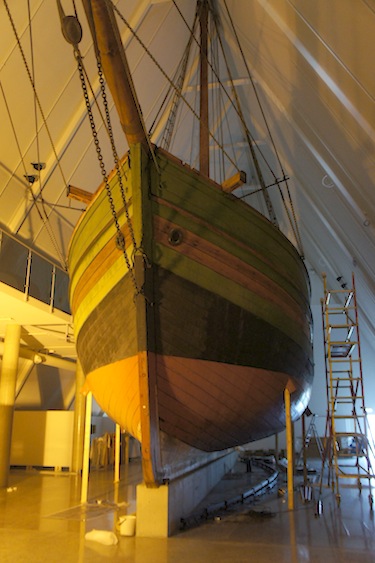 The Gjoa, the ship sailed by Norwegian polar explorer Roald Amundsen through the Northwest Passage in 1906, is now protected by a special structure at the Fram Museum in Oslo, Norway. (PHOTO BY ALEX BOYD) 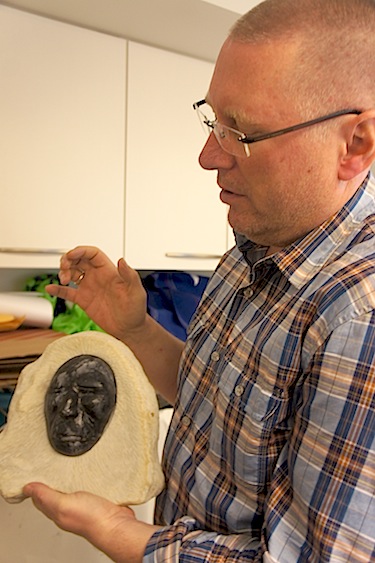 Geir Klover, the director of the museum, holds a piece of art from Gjoa Haven — the museum wants to serve as an outlet for the community’s artists. (PHOTO BY ALEX BOYD)

OSLO, NORWAY — Arctic winter travelers take note: sledge runners run smoother when treated with water; long, loose clothing is warmest; and dogs from Greenland are better than ones from Alaska because they’ll eat their fallen comrades in a pinch.

All tips that famed explorer Roald Amundsen swore by on his groundbreaking polar expeditions a century ago.

Not only that, but according to a new exhibit opening in Oslo, Norway on June 12, they’re all tricks he learned from Inuit.

The new wing of the Fram Museum in Oslo is devoted to the crossing of the Northwest Passage, the sea route through the Arctic Ocean — and Nunavut.

Melting sea ice may have made travelling this route less difficult in recent years. But getting through the Northwest Passage was long the top prize in nautical exploration and a feat attempted repeatedly by seafaring Europeans for 400 years until finally achieved by Amundsen in 1906.

For the first time the ship Amundsen used, the Gjoa, will be housed inside a specially constructed building, alongside exhibits about the people he encountered and items he collected — like hunting tools, fur clothing and blubber-fuelled lamps — that were crucial to their daily life.

And all involved in the new exhibit hope these artifacts will continue to act as a link between those who have continued Amundsen’s polar research and the people he left so long ago.

About 15 items, to be repatriated to Gjoa Haven, are also currently en route to the western Nunavut community where a new cultural centre is under construction.

That’s fitting because the time Amundsen spent with the Netsilik Inuit during what was intended to be a winter stopover turned into an almost two- year stay, said Geir Klover, the director of the Fram Museum.

Amundsen’s time there was key part of the story of the first crossing of the Northwest Passage.

The meeting was decisive for both parties. The RCMP would later choose the site of Amundsen’s camp for the settlement now know as Gjoa Haven, now a community of about 1,300. Likewise, Klover says his time with Inuit armed Amundsen with many of the skills that earned him a reputation as one of the most gifted polar explorers.

The exhibit “shows how important the link between the Norwegian explorers and the Inuit was,” Klover said in a recent interview. In comparison, many of the English explorers treated the indigenous people they met “like dogs,” he said.

Amundsen was unique at a time when his contemporaries prized knowledge obtained through formal education. But he saw the expert ability of Inuit to survive in a severe climate and devoted his time in Gjoa Haven to learning things like treating skins, building igloos and driving dog sleds, Klover said.

Amundsen also brought back what is still the biggest collection of items from the Arctic during that time period, said Tone Wang, the head of exhibitions at the Museum of Cultural History in Norway, who is lending the items to the new display.

Unlike most amateur collectors, Amundsen chose things based on their utility, not attractiveness. “It’s not because they had nice paint on them,” Wang said. He gathered items used by men, women and children in everything they did. And, always meticulous, he usually got several examples of each.

Tore said it’s also rare because researchers don’t have to worry if the items are authentic or were taken unethically because Amundsen documented each item obsessively. In most cases he traded hard to get items, like metal tools, for the objects he wanted.

“What shines through, is his extreme respect,” she said, for the people he met and their way of life.

Back at the new exhibit, Klover said they will incorporate art and writing done by Gjoa Haven artists. In the future he said he hopes that a video link can be set up connecting the museum and the cultural centre where the items will be shown in Gjoa Haven. He also hopes to eventually be able to sell more work from people who live in the community.

“We are trying to be an outlet for their art,” he said. “We will champion Gjoa Haven.”