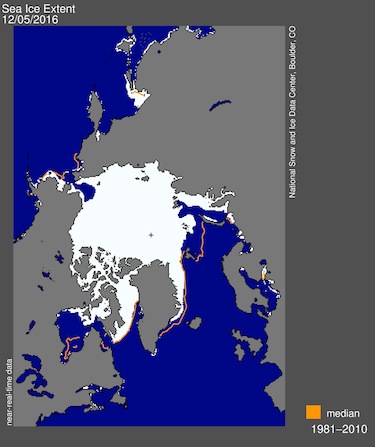 Arctic sea ice extent for November 2016 was 9.08 million square km. The magenta line shows the 1981 to 2010 median extent for the month. The black cross indicates the geographic north pole. (IMAGE COURTESY OF THE NSIDC) A team from the University of Victoria put the final touches on their underwater ocean observatory in 2014 before launching it into the water off the dock in the western Nunavut town of Cambridge Bay. Data from the observatory now show that ice formation in Cambridge bay has been slow and thin. (PHOTO BY JANE GEORGE)

November brought record-breaking high monthly temperatures in many Nunavut communities and across most of the circumpolar region.

“For the globe as a whole, sea ice cover was exceptionally low,” the NSIDC said, referring also to the state of ice at the South Pole.

At this time of year, air temperatures near the surface of the Arctic Ocean are generally well below freezing, the NSDIC also said—but this year has seen exceptional warmth.

The overall rate of ice growth this November was 88,000 square kilometres per day, a bit faster than the long-term average of 69,600 square km per day.

But for a few days in the middle November, the Arctic sea ice cover growth went into a slump, decreasing by 50,000 square km—”an almost unprecedented occurrence for November over the period of satellite observations,” the NSIDC said.

Ice formation in Hudson Bay during November was 40 per cent of its usual extent, according to the Canadian Ice Service.

And Ocean Networks Canada’s Cambridge Bay ocean observatory, which has been monitoring ocean conditions in this western Nunavut community since 2012, has produced sea ice measurements that also show these same trends.

In Cambridge Bay, the ice thickness is less than about half of what it should be.

While sea ice growth started to grow in October as usual, Oceans Network said Dec. 5 that the rate of growth in 2016 has been slow.

Sea ice over the Cambridge Bay underwater observatory is typically more than 50 centimetres (about 19 inches) thick by early December, while this year it is only 23 centimetres (nine inches,) the release said.

Overall, in the Arctic, November sea ice extent for 1979 to 2016 shows a decline of five cent per decade.