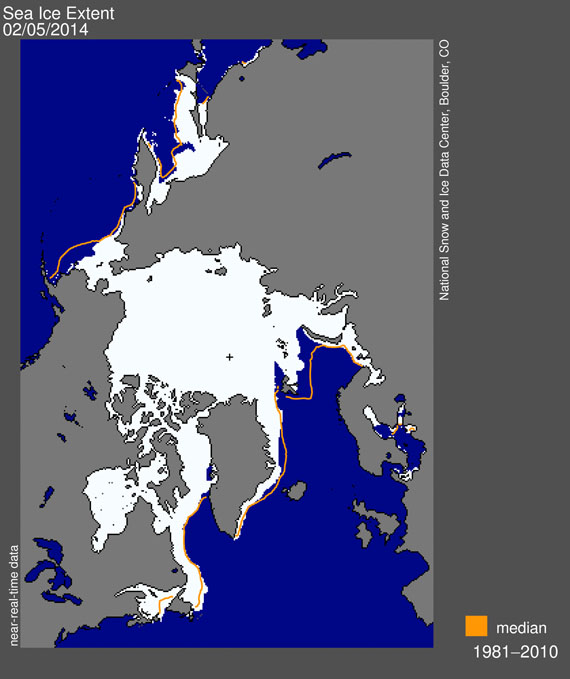 This map from the National Snow and Ice Data Center shows the extent of Arctic sea ice this past January. (IMAGE COURTESY OF NSIDC)

The extent of Arctic sea ice this past January stood below the long-term average, a Feb. 5 report from Colorado-based National Snow and Ice Data Center has found.

This is the fourth lowest annual recorded level of Arctic sea ice coverage for the month of January since 1978. The three previous January lows were recorded in 2005, 2006 and 2011.

Records indicate that, for January, sea ice is declining at a rate of 3.2 per cent each year. That’s an average of 47,800 square kilometers less ice, more than the size of the country of Estonia, recorded each successive January.

The lower than average ice coverage is affecting the Barents Sea above Norway and Russia, the Sea of Okhotsk above Japan and next to Russia, and the Bering Sea in between Russia and Alaska.

“While recent winters have seen more extensive sea ice in the Bering Sea, this is the first January since 2005 for which below average conditions have been observed there,” the NSIDC said.

For Baffin Bay, the Labrador Sea and the Gulf of St. Lawrence, the sea ice average extent is “close to average.”

At the same time, decreasing levels of sea ice extent don’t necessarily mean that the total volume of sea ice is shrinking at the same rate.

That’s because sea ice thickness was difficult to measure in the past.

The NSIDC warns this data “should be taken in context,” however.

“It is estimated that in the early 1980s, October ice volume was around 20,000 cubic kilometers […] meaning that ice volume in October 2013 still ranks among the lowest of the past 30 years,” NSIDC said.

At the other end of the Earth, sea ice “remains significantly more extensive than average.”