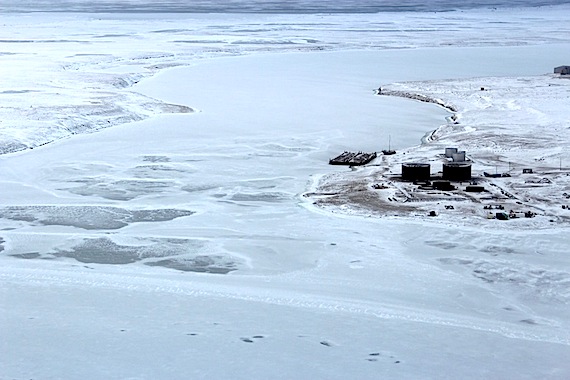 The West Arm near Cambridge Bay’s landing beach this past October, when the NTCL determined the ice build-up was so bad it couldn’t operate even with help from a Coast Guard icebreaker. (PHOTO COURTESY OF THE CCG) 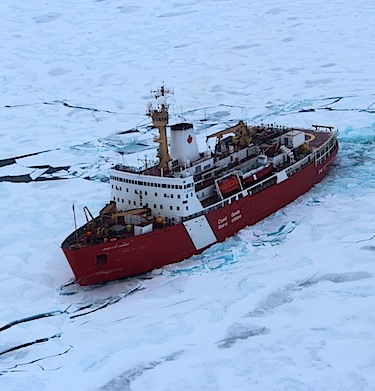 The CCGS Louis S. St-Laurent in Cambridge Bay over the weekend of Oct. 18, on standby to provide icebreaking help to the NTCL’s Nunakput. (PHOTO COURTESY OF THE CCG)

If you work at health centres in the western Nunavut communities of Taloyoak or Gjoa Haven — or use health services in these communities, you will likely find those facilities spic-and-span and well-equipped with medical supplies.

But that cleanliness and good stock of materials comes with a hefty price tag for the Government of Nunavut.

That’s because more than 8,000 pounds of supplies, about $100,000-worth in the South, were recently moved by chartered aircraft from Hope Bay to Cambridge Bay and then flown on to Kitikmeot communities.

“Unfortunately, one of the suppliers for the medical goods mislabelled multiple orders destined for Taloyoak and Gjoa Haven. The freight was mistakenly all labelled for Cambridge Bay. The orders were of significant size and needed to be re-directed from Cambridge Bay to the correct communities (Taloyoak and Gjoa Haven,)” Hillary Casey, spokesperson for Nunavut’s department of Community and Government Services said in an email received late Nov. 17.

And this came was after the supplies had already traveled across Canada.

The GN-ordered supplies arrived in Hay River in the Northwest Territories by courier — at the supplier’s expense, Casey said — before they finally ended up aboard the Northern Transportation Co. Ltd.’s last barge to the Kitikmeot region, the Nunakput, which then never made it into Cambridge Bay.

On Oct. 19 NTCL told its clients in Cambridge Bay that the Nunakput, for which they’d been waiting since September, would not be able to deliver its cargo to the community after all due to heavy ice conditions.

“NTCL had offered to send the shipments from Roberts Bay to Cambridge Bay via cat train over the tundra-Ice once the surface has frozen. The GN chose to move the medical supplies immediately to ensure no interruption in service to the public,” Casey said.

The more than 5,000 items ordered by the GN’s health department included 50 cases of paper towels and bathroom tissue, four cases of toilet bowl cleaner, 70 cases of various sized garbage bags as well as items such as 50 cases of stretcher sheets, 72 catheter boxes and X-ray film, fixers and developers.

The air services tender for the GN-paid charters to bring the materials to Cambridge Bay also says these weighed about 8,000 lbs. on 12 pallets equalling 4,620 lbs., and in three wooden crates weighing in at 3,379 lbs.

“The GN is working with NTCL to recover the cost of the air charter from Roberts Bay to Cambridge Bay (approximately $25,000),” Casey said.

In late October, the barge offloaded the GN stock and other supplies at the Hope Bay, about 90 kilometres south of Cambridge Bay on the mainland, where sources, who asked not to be named for the purposes of this story, told Nunatsiaq News that everything is now frozen inside sealift containers — except for some perishables, which are due to be flown to Cambridge Bay.

Other NTCL customers, who ordered items ranging from bingo cards to furniture, paint and beer, will have to wait until their order — much of it frozen beyond use — are brought to Cambridge Bay in March on a ice road.

While NTCL has said it will pay the replacement cost of the damaged products, the lack of some materials postponed major work projects, such as a four-plex apartment construction, by a year and added many dollars on to other projects because contractors has to bring in what they needed by air.

“We didn’t get anything,” said Peter Laube, owner of Kalvik Enterprises, a construction company in Cambridge Bay, of his large order on board the Nunakput.

Back in early October, Laube said he was “livid” about the delays that caused him to postpone work and spend more money.

Laube is no happier more than a month later.

Reached in Cambridge Bay Nov. 14, Laube said that he — and as far as he knows — other clients haven’t heard a word from NTCL and that they’re considering their next step.

A request from Nunatsiaq News asking for additional information from NTCL has not yet led to a response.

Overall, NTCL has experienced a difficult year: another of its barges broke loose from its tug Oct. 20 en route to Tuktoyaktuk in the Northwest Territories.

Most recently spotted in thickening ice about 70 km northwest of Prudhoe Bay, the barge will remain in the ice for the winter — and later its 3,600 litres of fuel will be offloaded.

The Alaska Dispatch reports that, earlier this month, NTCL dropped a GPS transmitting beacon onto the vessel to provide the company and the United States Coast Guard with daily updates on the barge’s co-ordinates.