New system badly needed, but tusks may be devalued 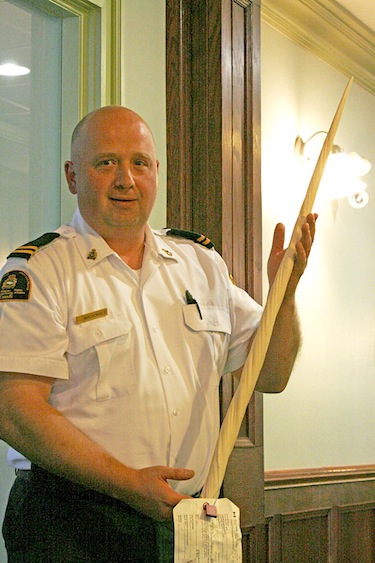 Jeff MacDonald, conservation and protection supervisor for the Department of Fisheries and Oceans, holds a prototype of what the new narwhal tusk traceability plan would incorporate into commercial narwhal tusks. A tag would be permanently attached to the tusk if the proposed Narwhal Integrated Fisheries Management Plan is approved by the DFO minister. The plan was debated at a Nunavut Wildlife Management Board hearing in Iqaluit July 24 to July 26 at the Arctic Hotel. (PHOTO BY DAVID MURPHY)

Commercial narwhal tusks may get an extra accessory if the Department of Fisheries and Oceans has its way.

The DFO proposes a new narwhal tusk traceability as part of the draft Narwhal Integrated Fisheries Management Plan debated this week in Iqaluit at a public hearing organized by the Nunavut Wildlife Management Board.

A permanent tag would be attached to ivory narwhal tusks at all times, if the DFO minister accepts the plan. This is to identify and track the tusks when they are traded nationally and internationally.

The new plan would see two small holes drilled into the base of the tusk, with an aluminum ring carrying a marine mammal tag looping through them.

When hunters remove the tusks from the narwhal, they must attach a marine mammal tag to it, and then present it to a conservation or fishery officer, who will affix the tag to the permanent attachment.

Jeff MacDonald, conservation and protection supervisor for the DFO, said many observers think this is a badly needed change.

Currently, narwhal tusks are identified and recorded by a measurement system. The conservation officer measures the tusk and gives it a marine mammal tag.

But when tusks are shipped to ivory dealers, they polish the base and tip, so the measurements go askew.

“There is a need for new robust system in an international forum, they said. There is understanding that not all tusks the same,” said MacDonald.

One broker who was not consulted by the DFO is Ron Gray from Vancouver.

He’s president of Canadian Ivory Inc., and says that while the changes are good, he has several concerns with the new tagging system.

“The system that we have right now is not very robust, and we were having trouble with tusks that were not measured properly,” he said, adding that he won’t buy narwhal tusks from one particular Nunavut community, due to a history of poor recordings on the tags.

“When they get down to the south, we can’t [export] them on because the length of the tusk doesn’t match the marine mammal tag,” he said.

The permanent tag poses a problem, however. The tags will “of course” devalue the tusks, as the tusks are used for display purposes and a tag would be “unsightly,” Gray said.

NTI wildlife consultant Glenn Williams asked MacDonald about the loss of value that the new tags would cause, but MacDonald did not give an outright answer.

“From NTI’s point of view, it is unknown to us at this point whether holes drilled in tusks are devalued or not,” Williams said.

“There’s a certain amount of frustration established in dealing with this issue. There’s a lack of openness in regards to details around, to what the extent really is,” he said.

Williams said NTI proposed alternative tagging methods to the DFO, like digital photography or DNA sampling, but those were disregarded.

Another issue is the metal ring around the tusk. Ivory brokers could no longer bathe the tusk in hydrogen peroxide to sanitize the tusk, something that is mandatory if it’s traded to countries like Australia where a veterinarian’s certificate is required.

“I use 29 per cent hydrogen peroxide. It is so corrosive to metal, that it can actually start spitting, and if there is a metal tag, it can corrode it until it disappears,” Gray said.

“Plus it’s dangerous to me if it starts spitting. If you get a drop of hydrogen peroxide in the eye, you’ll go blind. So I don’t want to have metal on a tusk that I have to put into a hydrogen peroxide bath,” Gray said.

The tusk would also still be measured for DFO records, something that “scares” Gray.

“Do one or the other, don’t do both,” said Gray. “There’s too many chances for errors there. When it comes down from the north, I’m finding errors and I end up suffering as a result.”