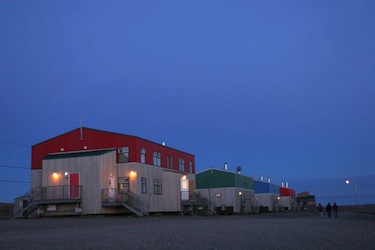 Aupaluk, Nunavik’s smallest community, with a population of about 195. (FILE PHOTO)

The Quebec coroner’s office could be called in to investigate the recent death of a woman in Aupaluk in co-ordination with the Kativik Regional Police Force and assistance from the Surêté du Québec, a SQ spokesperson confirmed Nov. 24.

But the SQ’s Benoît Coutu was unable to say whether this would happen.

Geneviève Guilbault, a spokesperson for the coroner’s office, said no investigation into that death had yet been asked for.

After the recent death of woman in the Nunavik community of Aupaluk, a commenter on the Nunavik Facebook news site, “Your voice on Nunavik issues,” called for an inquiry and media attention into the woman’s death.

Aloupa Peter Kulula of Kangiqsujuaq alleged in a Nov. 21 post that “a person died due to the carelessness of professionals, first of all the KRPF officers.”

Kulula said members of Nunavik’s regional police force pulled over a snowmobile after they saw an intoxicated passenger who was being driven home by a relative who was not intoxicated.

Kulula alleged that the KRPF constables then decided to use excessive force, “breaking the arm of the passenger,” and possibly her ribs, and then dragged her to the police car.

According to Kulula, the woman received only painkillers from medical staff in Aupaluk. She was later released “without proper assessment” from health workers, he alleged.

Other sources have identified the woman as Annie Angutinguak.

“The professionals who are suppose [sic] to help and protect are isolating themselves and classifying the population to some kind of degree that they treat people like that in the most disrespectful way,” Aloupa writes.

Kulula’s posting received an avalanche of comments, which revealed considerable anger at the police force, as well as considerable confusion about where to file complaints.

In a statement issued earlier this month, the Kativik Regional Government told Nunatsiaq News that to make a complaint about police services, you can:

You can fill out the complaints form directly on the commission’s website and forward it to the Commissaire à la déontologie policière.

This is as safe as sending it by mail, the commission’s website notes. You can also find the forms at the local police station or Sustainable Employment office or from KRPF headquarters at 1-800-964-2644.