Nunavik artist calls on leaders to declare state of emergency

“We’ve never seen so much death by suicide” 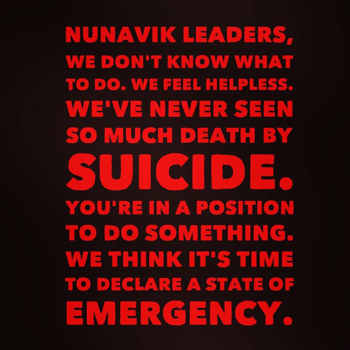 Nunavik singer/songwriter Beatrice Deer posted this message to social media May 13, encouraging the region’s leaders to declare a state of emergency to respond to a number of recent suicides in Nunavik.

A growing number of Nunavimmiut are asking the region’s leadership to declare a state of emergency in response to the high number of suicides that Nunavik has suffered this past winter and spring.

A campaign launched last week by Nunavik singer-songwriter Beatrice Deer last week has made the rounds on social media since it was posted May 13.

“Nunavik leaders; we don’t know what to do,” read Deer’s message, shared 185 times on Facebook over the weekend. “We feel helpless. We’ve never seen so much death by suicide.

“You’re in a position to do something. We think it’s time to declare a state of emergency.”

Deer, who grew up in Quaqtaq and now lives in Montreal, acknowledges that suicide has long been an issue in the region.

“It just hasn’t been this much,” she said.

Declaring a state of emergency would mean more funding and a stronger political will to help Nunavik steer through this crisis, she said.

“The more support, the better chance at success we have,” Deer said.

But the crisis has since touched other communities in the region. Quebec’s coroner’s office takes years to confirm and report suicide statistics, but since the end of 2015, there have been at least 10 deaths by suicide across the region, and another suicide in Montreal that’s considered to be linked to the region.

To put that in perspective, the most recent statistics available for the region show that there were 11 suicides in Nunavik in all of 2013. Here’s a look at the number of suicides per year in Nunavik going back the previous five years:

Just over a third of the way into 2016, Nunavik could be faced with one of its worst years for suicide yet.

Deer, now 33, worries that her generation will be a lost one if it doesn’t get the necessary support to overcome the past traumas she believes triggered the suicide crisis to begin with.

Deer’s own sister died by suicide in the late 1980s. She has lost a number of family and friends since; many of them people living with untreated trauma.

“Often those who commit suicide have been victims of some kind of abuse; the other part is mental illness,” she said. “And there’s just not enough resources in Nunavik to deal with it.”

Deer knows these feelings personally; she has struggled with depression and suicidal thoughts. She was only able to overcome those feelings through intensive therapy she received once she relocated to Montreal, which Deer said helped her process her pain and encouraged healing.

Deer says she has now been sober for five years, but she needed tools to help her recover — tools she says aren’t available to most Nunavimmiut.

“Counselling made a huge difference in my life,” she said. “Life doesn’t have to be suffering. But people who face suicide only see the suffering and feel like it’s their only way out.”

For its part, the Nunavik Regional Board of Health and Social Services has said it has the support it needs from the Quebec government.

The health board said it has hired a number of additional front-line workers since the winter, including social workers, psychologists and counsellors.

In the wake of Nunavik’s suicides, Quebec’s Aboriginal Affairs Minister Geoff Kelley visited Kuujjuaq May 3 to meet with local leaders.

“The local and regional authorities have clearly expressed to me their desire to take charge of the situation, in a way that respects their customs and traditions, and I intend to honour their wish,” Kelley said in a release following his visit.

“I am here to meet with the front-line workers and the community leadership to reiterate that they have the support of the Government of Quebec during these challenging times.”

But Deer fears the efforts so far have not been enough.

“I know our leaders put a lot of effort into leading Nunavik… but it’s okay to get more help,” she said.

Nunavimmiut who are in need of support or have thoughts of suicide can call a number of toll-free numbers to speak to someone: