“Instead of writing a book, I’m writing my life in art” 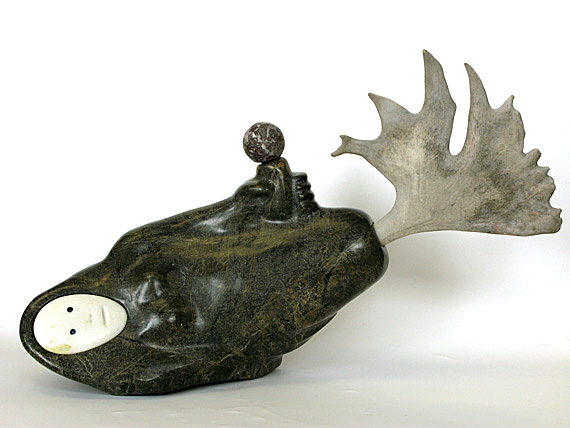 Iyaituk’s 2007 piece Young Mermaid Playing Ball with a Coloured Pearl, sculpted in soapstone, ivory and caribou antler, was featured in a 2014 Canadian Guild of Crafts exhibit in Montreal. (FILE IMAGE) 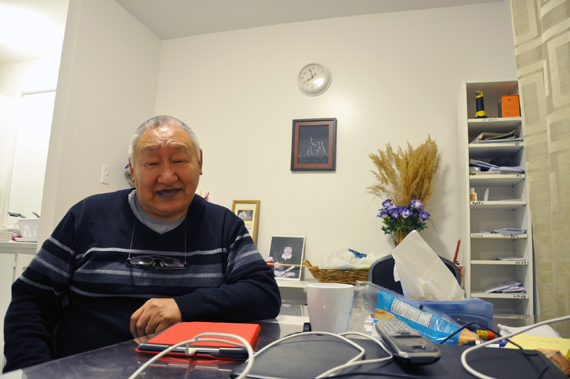 Mattiusi Iyaituk seated in his kitchen at home in Ivujivik. At 66, the sculptor still does all his carving in a small shelter behind the house. (PHOTO BY SARAH ROGERS) 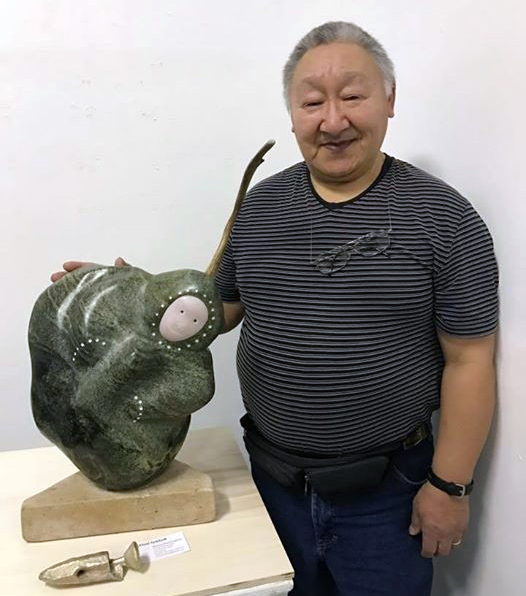 Iyaituk poses with the carving he created during a month-long residency at the École nationale superiére des beaux-arts de Paris, a renowned French art school. (PHOTO COURTESY OF M. IYAITUK)

IVUJIVIK—It’s a cold and bright February afternoon in Ivujivik while Mattiusi Iyaituk shovels snow piled up around a shed outside his blue-roofed home.

The 66-year-old sculptor has just returned home to Nunavik from a trip to Paris, but several flights and a few time zones later, he doesn’t seem fatigued.

He’s planning to build a new plywood overhang to hold his outdoor studio in place. A storm the week before took out the tented shelter within which he does most of his carving.

Inside, Iyaituk’s home is neat and tidy; white walls and orderly shelves hold art, knickknacks and his bills labelled in piles. The only clutter is at the kitchen table where we sit.

“In Paris, they don’t polish their art,” Iyaituk said, noting the difference from his own soapstone pieces. “They mainly use marble and limestone.”

Under Iyaituk’s direction, the French students wanted to give their pieces a smoother finish but, “limestone doesn’t get smooth,” he said.

“Smoothness” wasn’t even a technique Iyaituk was trying to impart on the students in his limited French.

“I was trying to teach them to make art without drawing first,” he said. “I do it by just looking at the piece.”

Iyaituk calls that “removing the blanket,” as the stone communicates the shape it’s meant to take.

Over the last 40 years of Iyaituk’s career as an artist, he’s removed the blanket on hundreds of pieces crafted in soapstone, antler, bone, wood, copper and even ice.

Everything he’s ever made has been sold, most of it through the local co-op in Ivujivik.

Iyaituk made his first carving when he was 14 years old. He sold it to the same co-op for $2, which at the time bought him a fair bit of pop and chocolate.

But the draw of the artist’s life didn’t take hold right away; Iyaituk finished his studies and went on to work as a police officer for the Sûreté du Québec through much of the 1970s.

Then came the news that his father had a heart condition and could no longer manage any stress. Iyaituk said his father constantly worried about his son’s work as a policeman.

One of the first carvings he made after he left policing was the figure of a man. But Iyaituk didn’t quite like it so he carved another figure on the same piece of stone.

Not thinking much of the piece when it was done, he put it aside.

Some time later, his sister’s husband was in Ivujivik buying art for the co-op. He saw the piece and paid Iyaituk well for it.

“That’s when I became an abstract artist,” Iyaituk said.

“I used to do art as I saw it done. I once sold a carving that I thought was unfinished. But that’s what abstract art is.”

By 1981, his first full year of carving, Iyaiktuk was invited to exhibit solo at a gallery in San Francisco. That launched a career that’s taken the artist across the United States, Europe and Asia where he’s exhibited work, given workshops and seen his pieces featured in museum collections.

He also served as president of the Inuit Art Foundation for more than a decade.

Iyaituk keeps busy as an Inuit art ambassador, travelling to workshops and art events in and outside Nunavik.

In Paris, he sculpted a large piece of Brazilian soapstone which the school ordered in especially for him. In it, he carved the face of a man—a self portrait, he said—in a struggling pose, “carrying heavy things from our past lives.”

It was difficult, however, for Iyaituk to discern the stories behind the pieces his French students made.

“My artwork is stories of my life, my past, stories I’ve heard from my parents,” he said. “Instead of writing a book, I’m writing my life in art.”

Iyaituk imparted some of the finer points of sculpting too, like how to stop pieces from wobbling during the carving process. Carvers do that by distributing the weight to the centre of the piece, he said, and making sure three points of the stone touch your work surface.

When Iyaituk and his wife weren’t in the studio or classroom in Paris, they spent their time visiting galleries and museums. Iyaituk is well-travelled, but this was his first time in Paris in 15 years and he took the opportunity while there to conquer an old fear.

Some years ago, while collecting eggs in the Digges Islands, Iyaituk got stuck on a rock ledge. He couldn’t get back down, or climb up, and had to wait for a friend to extend a rope down to pull him up. The experience left him scared of heights.

So while in Paris, he decided to climb the famed Eiffel tower for a view of the city.

“I told myself—this is the time to cure my fear of heights,” Iyaituk said. “And I wasn’t scared at all.”