“From where we were to where we are now, it’s made a big impact” 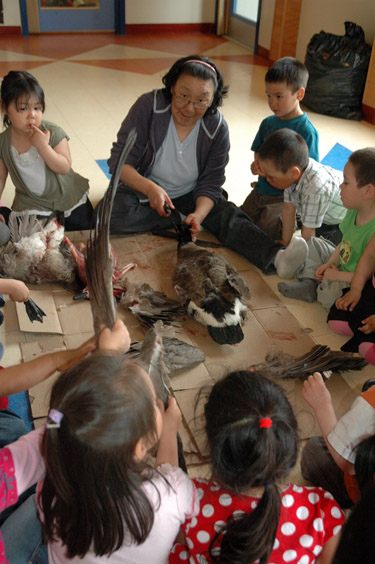 An elder shows children at Mikijuq daycare in Kangiqsujuaq how to pluck a goose. (PHOTO BY SARAH ROGERS)

More than 15 years after it was first launched, Quebec’s universal childcare program has seen a number of positive spin-offs in Nunavik communities, the Kativik Regional Government says.

Offering $7-a-day childcare to Nunavimmiut parents and caregivers has allowed more parents to go back to work and school, and it’s also cut back on the number of single mothers on welfare and created hundreds of permanent jobs in the region.

“From where we were to where we are now, it’s made a big impact,” said Julie-Ann Berthe, assistant director of the KRG’s sustainable employment department, which oversees Nunavik’s 19 childcare centres and 1,009 childcare spaces.

“We can see now from when the centres opened in 1998, you’re starting to see graduation rates up,” she said. “It’s helping with school retention.”

Berthe presented an overview of the region’s childcare system May 27 to the meeting of the KRG’s regional council in Ivujivik, to illustrate just how much the program has grown.

It wasn’t until the Quebec government launched its family policy in 1997 that Nunavik’s other communities saw their first childcare centres built. The subsidized program meant parents only paid $5 a day for childcare.

By the early 2000s, all of Nunavik’s 14 communities had their own childcare centres with more than 600 childcare spaces.

Today, parents and caregivers pay $7 a day for a a child’s place in one of Nunavik’s 19 childcare centres, which now include three new centres in Inukjuak, Puvirnituq and Salluit.

A second 45-space centre will be built in Kangiqsualujjuaq this summer, while the KRG has made requests for two more centres — one in Umiujaq, which would be that community’s second centre, and another for a third centre in Kuujjuaq.

“The demand is definitely there,” Berthe said.

While Nunavik’s centres are based on a Quebec model, staff and children speak mainly in Inuktitut and regional organizations have helped to develop Inuit-specific curriculum and tools in its centres.

One example: Unikkaangualaurtaa, Let’s Tell A Story, is a collection of stories, songs and activities created for young children by Nunavimmiut elders.

And early childhood education trainees in Kangiqsualujjuaq recently created a songbook and DVD, which offer patterns for educators to use during song time.

More than 200 educators have graduated from Nunavik’s early childhood education program, an in-house program that is offered in each community; another 15 educators will celebrate their graduation in Kuujjuaq this weekend, Berthe said.

More than 80 per cent of Nunavik’s childcare program is funded through the Quebec government, through the KRG. Another 10 per cent comes through federal funding; the rest is paid by parents and caregivers.