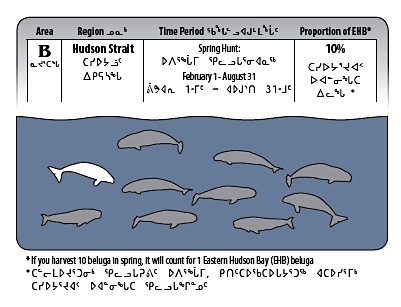 If hunters taken 10 belugas in the spring in the Hudson Strait, they’re counted as 11 belugas, according to the beluga management plan now in force.

The beluga hunt closed down along Nunavik’s coasts much earlier than usual this year — on Aug. 17 — angering some hunters in communities that didn’t catch their annual quota and will see no fall hunt.

“That is so unfair, so wrong in every way. I’m heartbroken,” said Sheila Ningiuruvik in a Facebook discussion on the end of the beluga season, which left Quaqtaq on Nunavik’s Hudson Strait with less than half of its total allowable catch of 25.

Another poster blamed “rogue hunters” who hunt beluga and undermine the management plan — they could use some therapy, he suggested.

Some have suggested that communities that overhunted should be penalized in the future.

Beluga statistics obtained by Nunatsiaq News from the Department of Fisheries and Ocean give a clear picture of which communities over-hunted in 2016: Salluit, with 34 landed beluga, Kangiqsujuaq with 29, Inukjuak with 10 and Umiujaq with three.

But in addition to the over-hunting this past year, there was another reason that the beluga hunt was suddenly closed down: under the current management plan, any catch of belugas is rated according to where and when it’s hunted as a way to protect the endangered Eastern Hudson Bay beluga stock, whose whales migrate along the Nunavik coasts.

This means that when hunters take 10 belugas between Feb. 1 and Aug. 31, the plan counts them as one.

The 30 belugas considered by the DFO to have been hunted from the EHB stock in 2016 pushed the region over the quota of 162 belugas which they could hunt under the three-year plan.

The plan ends at the end of this year.

And discussions on a new beluga management plan are set to start this month, when the Nunavik Marine Region Wildlife Board will host the regional Nunavimmi Umajulirijiit Katujjiqatigiinningit so Makivik Corp. and the DFO can decide how to move forward.