“This is kind of our final push” 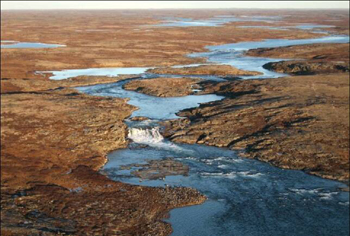 INUKJUAK — It’s been five years since Inukjuammiut voted in favour of a hydroelectric project on Hudson Bay, up river from the Nunavik community.

Momentum from that referendum faded in the years that followed, mostly due to a change in provincial government, and with it, a weaker promise of financial support for the dam.

But with Quebec’s Liberal party back in power again, Inukjuak’s Pituvik Landholding Corp. has put the hydroelectric dam project back on the front burner while it looks to secure provincial support.

“Every so often, someone from the community asks through the local radio what is happening with the project,” said Eric Atagotaaluk, president of the landholding corp. “This is kind of our final push.”

Atagotaaluk said the landholding corporation once again has the ear of the Quebec government, namely its Société du Plan Nord — an agency that oversees development under the province’s newly-revamped Plan Nord, its blueprint for development above its 49th parallel.

The hydroelectric project, as it was conceived in the late 2000s, would consist of a dam and a reservoir to produce eight megawatts of electricity from a section of river about 14 kilometres upstream from the community.

A feasibility study prepared in 2009 showed Innavik would be able to meet the electricity and heating needs of Inukjuak residents for at least 20 years.

But reviving the project may require a slightly-scaled back version to get the money the community needs, Atagotaaluk said — although it’s unclear how the scope of the project might change.

To help win support for Innavik, Pituvik has now engaged the help of a Montreal-based renewable energy firm to better tailor the project to the community and find other support.

While the original project was estimated to cost about $109 million, Innergex Development Corp. is working with Pituvik to trim its budget down to $95 million.

“With a reduced cost, it will certainly change the structure we’d hoped to have,” Atagotaaluk said. “[The community] may not be able to have majority ownership. In that case, we’d have to go back to the community with a second referendum.”

During its March 2010 referendum, 83 per cent of those who cast ballots said yes to moving ahead to the construction phase of the small dam and reservoir.

At that point, the project had a P3 Canada (public-private partnership) commitment of 20 per cent of the project cost, on the condition that Quebec also contribute.

But when Quebec pulled its support, so did the federal government, Atagotaaluk said.

“We’re breathing a last breath into this,” Atagotaaluk said, noting that Innavik could be an important “model” project for the region.

Although Quebec and its Société du Plan Nord have yet to commit funds to Innavik, Inukjuak’s landholding will continue to lobby hard for support, he said.

The landholding recently produced a film on Innavik to draw interest in the project, and the idea of financing renewable energy in a region that relies on diesel to heat its homes.

“This will allow us to become more autonomous, to depend less on the government, to create more jobs and to fight against climate change,” says the French-language video script, read by Atagotaaluk.

In 2013 alone, the video noted, Inukjuammiut used more than one million litres of fuel to heat their homes.

You can read more about the hydroelectric project here.