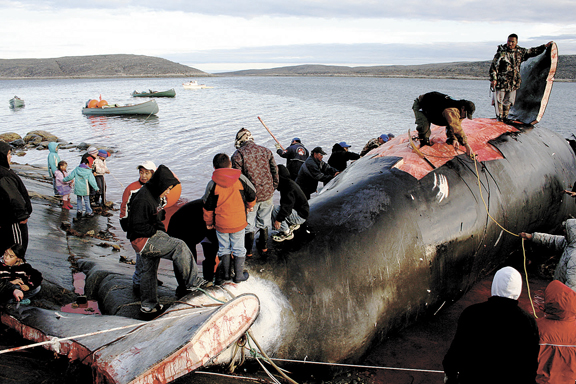 But the costs and planning required to prepare for the hunt proved too much for the Ungava Bay community, which means its residents have decided they must cancel this year’s harvest.

The local Nunavimmit Umajulirijiit (Hunting, Fishing and Trapping Association) had received a permit to harvest up to two whales, said its chairperson Johnny Oovaut, but he said the community won’t have the time or money to submit the hunt plan and budget by the deadline at the end of July.

“We’re just not ready,” Oovaut said. “We don’t have the weapons ready, but it’s the cost that makes it hard.”

In order to hunt a bowhead in Ungava Bay, Oovaut said the community would need to put together five hunting crews to oversee different parts of the hunt — the kill, butchering and safety monitoring.

Hunting crews are also required to use certain hunting weapons to kill a bowhead, including an explosive device.

The last bowhead hunted in Nunavik – harvested outside of Kangiqsujuaq in 2009 – cost that community about $200,000.

Although the community has support from regional organizations, there is no specific fund set up to help communities prepare for their hunt.

“Traditionally, you could hunt a bowhead with three men and a lance, but nowadays, you need all kinds of people involved,” Oovaut said. “If we did it the Inuit way, it would cost about $1,000.”

Nunavimmiut had fought since the 1980s for the right to once again hunt the bowhead, as their ancestors had centuries before.

But the hunt remained prohibited as the bowhead whale was designated as “endangered’ by the Committee on the Status of Endangered Wildlife in Canada.

When that status was lowered years ago to “threatened,” Nunavik organized its first bowhead hunt in 2008 in Kangiqsujuaq, followed by its second hunt the following year in the same community.

At the time, Jimmy Johannes of Nunavik’s Anguvigak hunters and trappers association called it “so important that we feel small trying to encompass it.”

But it’s been five years now since a Nunavik community has hunted a bowhead, raising questions about how feasible the hunt is for Nunavik’s communities to organize, especially its smaller communities, like Quaqtaq.

“It’s a big task that communities are reluctant to take the initiative to plan for,” Oovaut said. “There’s also the unfamiliarity with the animal — how to butcher it, how to prepare the meat and what you can actually eat.”

Oovaut said there’s not much knowledge sharing between other Inuit regions where the bowhead is hunted, such as Nunavut or Alaska.

Inuit could benefit from workshops or a guide that shows them how to use the bowhead, and recipes on how to prepare the muktuk, he said.

Quaqtamiut are divided on the issue, he added — some have pushed to bring the hunt to the community, while others are indifferent about it.

“Makivik [Corp.] fought for the right to hunt and we should not take that decision lightly,” Oovaut said. “But we’ve been living without the bowhead for so many years, we’ve lost interest.”

In Nunavut, where hunters have been harvesting bowhead whales since 1996, the hunt seems to be growing in popularity.

While each of Nunavut’ three regions is permitted to harvest one whale a year, wildlife boards in both the Kivalliq and Qikiqtani regions have requested permission to hunt two whales each.