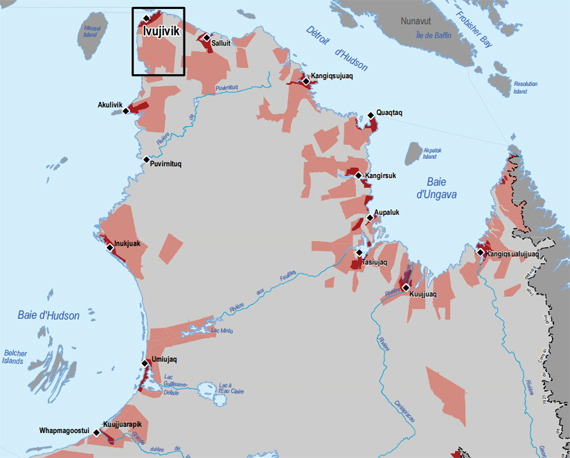 This map of the Nunavik region shows each of its communities’ Category 1 lands, marked in red, and category 2 lands in pink. (IMAGE COURTESY OF MERN QUEBEC) 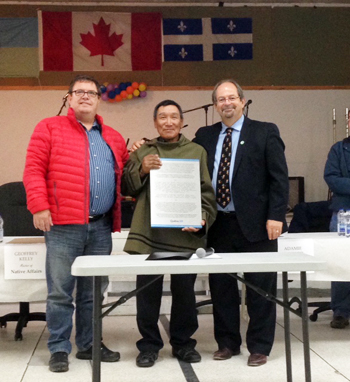 Forty years after the original signing of the James Bay and Northern Quebec Agreement, the Inuit of Nunavik’s northernmost community are the official owners of 525 square kilometres of surrounding land.

Quebec government ministers and Nunavik leaders visited Ivujivik July 20 to mark the transfer of Category 1 lands to the community, lands that will now fall under the management of the new Nuvummi Landholding Corp.

“It’s a new era and circumstances changed and evolved and so has the community and my people as we take this new day with a lot of hope,” said landholding president Adamie Kalingo in a July 20 release.

Under the JBQNA’s land regime, Inuit have control over parcels of Category 1 lands, which surround their community. Category 2 lands belong to the state — in this case, Quebec — although Inuit have exclusive hunting, fishing and trapping rights on that land.

But up until recently, beneficiaries in Ivujivik did not exert control over those lands — at least not on paper.

That’s because in 1975, when the JBNQA was signed, the communities of Ivujivik and Puvirnituq decided not to sign the treaty, in opposition to its extinguishment clause.

But in 2006, Ivujivimmiut voted in a referendum to finally join the treaty, which kick-started a lengthy land selection process. A supplementary agreement to the JBNQA came into effect in March 2014.

The transfer of Category 1 lands now allows the community of 400 to plan its development, administer and grant rights and earn revenue by collecting rents, explained Makivik Corp., which manages the JBNQA on behalf of Nunavik Inuit.

“As we celebrate the 40th anniversary of the signing of the James Bay and Northern Quebec agreement, the community of Ivujivik’s decision to work with our agreement couldn’t have come at a better time,” said Makivik president Jobie Tukkiapik, in the July 20 release.

“Makivik has worked closely with the Inuit of Ivujivik for many years and the recognition of their land title is a testimony of that.”

The JBNQA has seen 24 supplementary agreements since it was first signed in 1975, including Ivujivik.

The Quebec government touted Ivujivik’s decision to sign on as an important part of its collaborative efforts with northern communities in the face of Plan Nord and economic development.

“With this transfer of responsibility, the village of Ivujivik possesses new tools and new resources through which to enhance its self-determination in relation with its territory,” said Ungava MNA Jean Boucher in a government release.