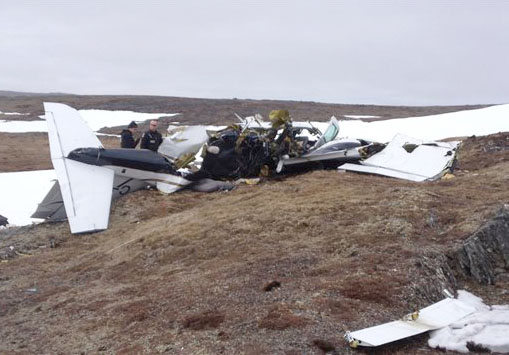 This Piper 23 twin-engined aircraft went down just outside of Kangirsuk late June 11, 2015, killing all three people on board. (PHOTO COURTESY OF TSB)

Residents of Kangirsuk, population 550, also want to make sure they’re better prepared to deal with that kind of accident, should one ever take place again.

A Piper 23 twin-engined aircraft went down along Ungava Bay late June 11, 2015, killing all three people on board.

The aircraft was piloted by 77-year-old Jean Robert Corbin of Winnipeg, carrying two passengers — Robert Drapeau, 48 and his son, Alexandre Veilleux, 23. All three died on impact.

The eldest Drapeau helped run a construction company in Kangirsuk and was coming to work in Kangirsuk for the summer.

According to a preliminary investigation, carried out by on-site police, the Transportation Safety Board and the Quebec coroner’s office, weather could have played a role in the crash.

But those organizations say their investigation is still ongoing. A TSB spokesperson said investigators are still working to determine if they can download any data from the aircraft’s GPS, which was badly damaged in the accident.

After the aircraft went down last June about two kilometres outside the community, a group of nine Kangirsumiut, which included some first responders and firefighters, responded to the scene.

But residents say many of those people weren’t prepared for what they found.

“Many of us were traumatized. We need to make sure the right people are dealing with this.”

Eetok said the responders were tasked with gathering the remains of the three victims themselves.

The aircraft’s insurer has since had the plane shipped south for further investigation.

KRG regional councillors asked the organization’s transport officials Feb. 24 if there was an emergency response plan in place to respond to major accidents like plane crashes.

“We do have emergency procedures in place, but they need to be updated and they don’t go far enough to include community debriefing,” said Ron Erlanson, who heads the KRG’s transport department.

“There should be a debriefing for all community members involved.”