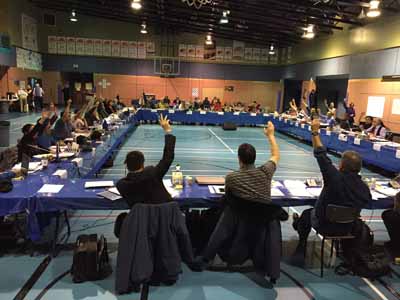 Regional representatives of Makivik Corp. and other Nunavik organizations voted March 26 to adopt the 2015 Nunavik declaration. (PHOTO COURTESY OF MAKIVIK) 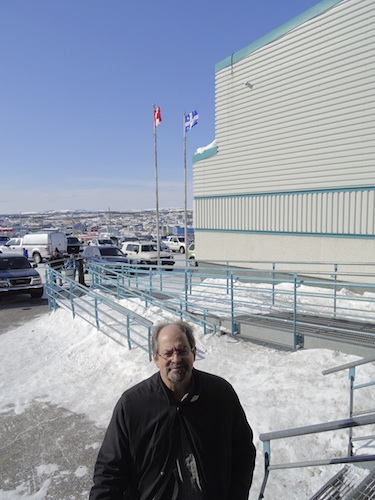 Quebec’s Aboriginal affairs minister Geoff Kelley, seen here on the stairs of the Kuujjuaq Forum, left Quebec City after the March 26 release of the Quebec 2015-16 budget so he could meet with delegates to the Makivik Corp. AGM March 27. (PHOTO BY JANE GEORGE)

And they’re determined to promote and protect their Inuit language and culture and work towards more autonomy.

The declaration, drafted and adopted at Makivik Corp.’s annual general meeting held this past week in Kuujjuaq, aims to set in motion a regional blueprint or vision for the region, crafted through the Parnasimautik consultations of 2013 and subsequent report.

“With the adoption of this declaration, we have clearly stated our commitment to protect our culture and language, improve our socio-economic situation and work towards a new governance structure,” said Makivik president Jobie Tukkiapik in a March 27 release.

While it’s been just four years since Nunavimmiut voted against a proposed new government model in a 2011 region-wide reference, Nunavik’s leadership wants the issue of self-governance back on the table.

Makivik is mandated to develop a strategy to negotiate with both the federal and provincial governments on behalf of Nunavik Inuit.

In drafting a declaration, the Nunavik of Inuit “have embarked on a journey to recapture our strength as people,” says the document.

It further commits the region to:

• secure an expanded and adequate land base for our wildlife harvesting activities and the development of our communities;

• support industrial development in the region only when it is sustainable and equitable towards Nunavimmiut, and respects all environmental and social protection regimes under our land claims agreements and other laws;

• pursue a connection to Quebec’s power grid and new forms of energy production, transportation and telecommunications;

• review the management of the region’s public housing and work towards eliminating Nunavik’s severe housing shortage;

• invest heavily in education “to reinforce the capacity of Nunavik Inuit;” and,

• develop more and better justice and social services adapted to the realities of Nunavik Inuit.

The Quebec government has yet to formally acknowledge or respond to the delivery of the final Parnasimautik report, which outlines the same priorities and commitments.

To speak with Makivik AGM delegates handful of Quebec ministers, including the province’s minister of Aboriginal affairs, Geoff Kelley, attended the gathering in Kuujjuaq on March 27.

“This meeting allowed us to better understand the concerns and needs of Inuit communities,” Kelley said in a March 27 release from the Quebec government.

“We consider it a matter of vital importance for the government and the Inuit to work together for the benefit of each and every resident of Nunavik villages.”

Among the issues raised during those discussions at the AGM in Kuujjuaq: the social and economic development priorities, Plan Nord and the Parnasimautik.

“There is still much to be done to improve the quality of life of the Inuit and stimulate the local economy, but I am convinced that by working collaboratively, we will find solutions to the challenges they face,” Boucher said in the release.

The Quebec politicians and the AGM delegates also watched an excerpt from a new documentary, produced by Makivik, on the James Bay and Northern Quebec Agreement.