Only 28 per cent of Nunavik voters cast ballots 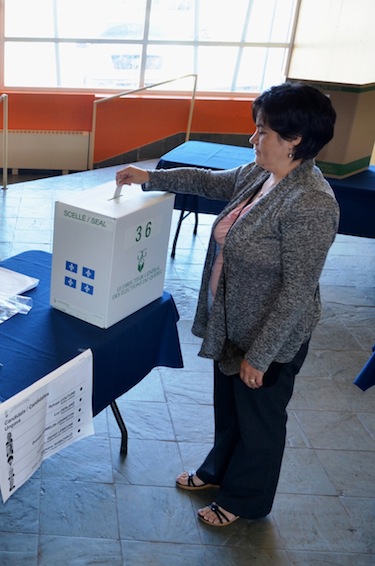 Kitura Fox-Koneak, who served as deputy returning officer in Kuujjuaq during the recent Quebec election, casts her vote Sept. 4. Kuujjuaq had the highest voter participation in Nunavik, with levels similar to the rest of Quebec. (PHOTO BY ISABELLE DUBOIS)

Fewer than one in three registered voters in Nunavik cast votes in Quebec’s Sept. 4 election.

But of those who did vote, nearly half supported the Liberals, who lost the provincial election.

Out of the ballots cast Sept. 4, here’s how voters in Nunavik made their choices:

• about 15 per cent for Sylvain Couture of Québec Solidaire;

• about 18 per cent for Luc Ferland of the Parti Québécois;

• about six per cent for the Option Nationale’s Dominique Hamelin-Johnson;

• about 47 per cent for the Liberal’s Gerald Lemoyne; and,

• about 11 per cent for the Coalition Avenir Québec’s Stéphane Robichaud.

If Nunavik’s voters had turned out in numbers recorded in other regions of Ungava, the Liberals — whose candidate Lemoyne visited Kuujjuaq during the end of the electoral campaign — might have won the riding.

But Ferland picked up 45 per cent of the total vote recorded in all regions of the riding and Lemoyne won only 35 per cent.

Of roughly 5,900 registered voters in Nunavik, only 1,700 cast ballots Sept. 4, that were accepted, according to a breakdown of the vote in the Ungava riding, obtained by Nunatsiaq News from Quebec’s electoral office.

In Quebec as a whole, more than four in 10 voters cast ballots Sept. 4, and in some ridings more than six in 10 voted.

Of Nunavik’s 14 communities, Ivujivik had the lowest turn-out Sept. 4 at 12 per cent, with only 24 of 190 eligible voters casting ballots.

In Aupaluk, Quaqtaq, Kangiqsujuaq, Puvirnituq and Salluit, voter participation was low, with only about two in 10 registered voters taking time to vote Sept. 2.

Sixteen ballots were also rejected in Kangirsuk, where 99 of 271 registered voters cast ballots.