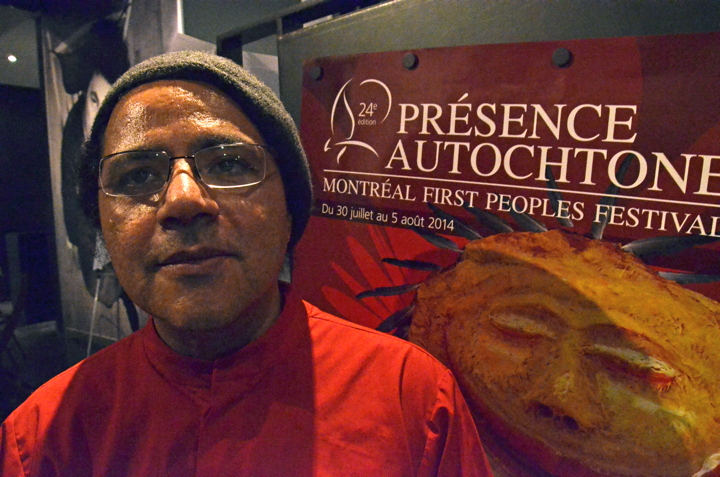 Filmmaker Joel Montanez at the world premiere of his movie, The Healing Winds, which debuted at the Montreal First Peoples Festival Aug. 3. (PHOTO BY DAVID MURPHY)

MONTREAL — It’s not a documentary, but it’s close.

After 15 years in the making, The Healing Winds, about a Qallunaat psychologist who makes his way to Salluit, Nunavik, finally debuted Aug. 3 at the 24th annual Montreal First Peoples Festival Aug. 3.

The film is loosely based on filmmaker Joel Montanez’s experiences as a psychotherapist living in the North, and how residential school survivors are still suffering from traumatic memories of their experiences.

“It’s an extremely complex and painful process and that’s why the film was made,” Montanez said shortly after the screening of the film to a near-capacity audience.

The film features the late Reepah Arreak, daughter of Bishop Benjamin Arreak, in a leading role. Montanez said he wanted to finish it to honour her.

The low-budget English-French-Inuktitut film features slices of historical context and facts about the residential school system, which saw Canadian Inuit children removed from their families and then stripped of their culture and language.

The film’s lead, a psychologist named Michael, played by Michael Daley, travels to Salluit where he encounters a woman, Reepah, played by Reepah Arreak, who’s haunted by a past sexual assault that occurred at a residential school.

Reepah is wary of the new leather-jacket wearing, Caucasian psychologist so Michael and Reepah agree on an unconventional treatment for dealing with Reepah’s lingering and painful memories: they both share past traumatic experiences with each other.

This portrayal of unconventional therapies may not be far from what actually happens in the North.

“None of the training or practices you might feel comfortable with in the South actually work up there,” said Nicolette De Smit, a retired Montreal social worker who saw the premiere.

De Smit said while working in the Cree territories, she had to “relearn” practices she was taught while training other social workers.

“It’s not effective to be using the techniques that we might use in therapy,” De Smit said.

This is Montanez’s first feature-length film. It was shot mostly in Salluit, and features almost all amateur actors. Montanez also directed, produced, casted, edited and wrote the film.

But the biggest issue was finding money to pay for the project over the past 15 years. But that’s because of the nature of the film, Montanez said.

“The subject was not something the people wanted to deal with. Especially mainstream Canada,” Montanez said.

Since filming began in 1999, three cast members have died — including Arreak.

Montanez said Arreak froze to death out on the land.

“She wanted to be a leading actress in an official film, as an Inuit, [from] beginning to end,” Montanez said.

“I think the legacy of Reepah is the legacy of courage. Reepah always went ahead. In spite of all the troubles she had in her life, she had an amazing work ethic,” Montanez said.

Montanez is now deciding where he hopes to distribute the film next.