Salluit student will travel to Israel to work with scientists 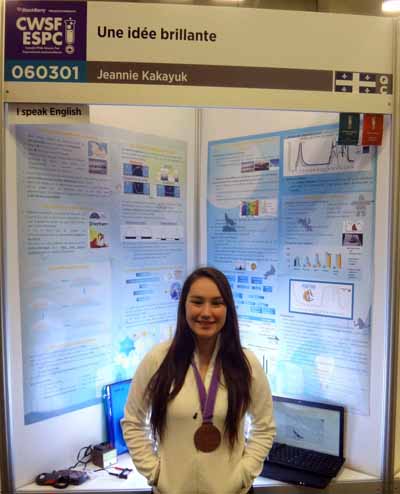 A Nunavik high school student has returned home from a national science fair competition with two awards for her project on luminotherapy.

She then went on to win first prize at Quebec’s Aboriginal Science Fair.

That earned Puxley a place among 500 of the top science students from across the county at the 2014 Canada-Wide Science Fair, hosted in Windsor, Ont. last month.

That’s where she picked up a bronze medal in the senior category.

Puxley was also awarded the Weizmann prize, which offers her a month-long stay in Israel, where she can work on a project with the help of professional scientists.

“Our congratulations to Jeannie for her sustained efforts and the perseverance that she demonstrated,” said a June 17 press release from the Kativik School Board.

Puxley’s winning project was a walk-in booth fitted with LED lights and closed off with white drapes. Her research suggested that sitting in the booth, with the lights illuminated for 40 minutes a day, can help make up for the lack of sunlight during the winter months.

“A lot of our teachers and other Qallunaat get hit really hard by the darkness,” Puxley told Nunatsiaq News last March. “A few teachers even bring their own boxes [from the South] so I thought I’d try to make my own.”