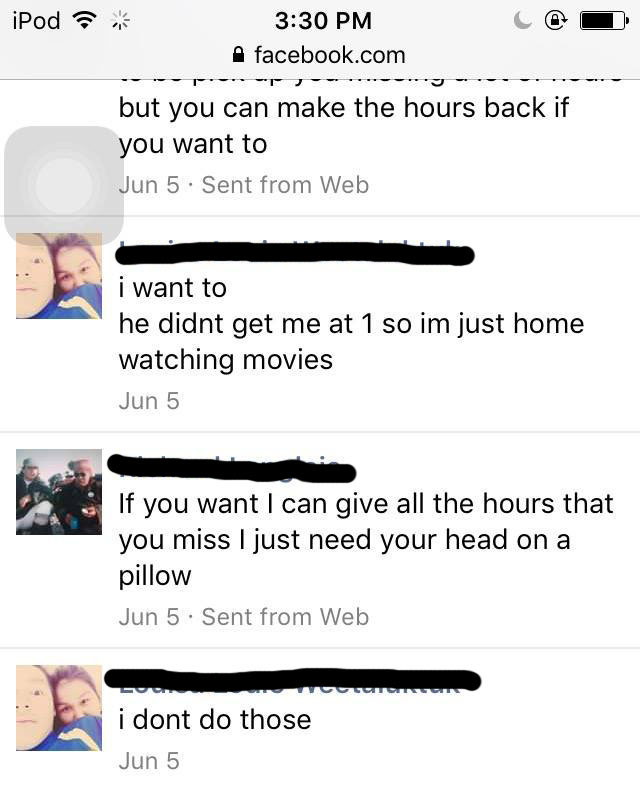 A text message exchange between an Puvirnituq hotel worker and a former manager accused of sexually harassing employees. 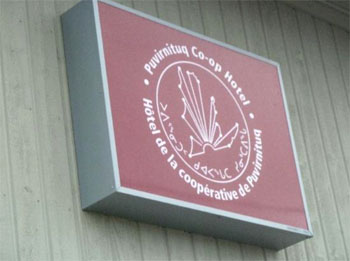 Puvirnituq Co-op Hotel is one of a number of services managed by the community’s co-op association. (FILE PHOTO)

A manager at the co-op hotel in Puvirnituq is no longer employed after allegations that he sexually harassed a number of staff members.

Housekeeping staff at the Nunavik hotel allege the man propositioned sex from female staff, some of them minors. The women also accuse him of inappropriate touching.

The housekeepers, who Nunatsiaq News chose not to name, say the manager offered them the opportunity to make up for lost hours of work if they would engage sexually with him.

“He said I could make up the hours if I went to the room with him,” a 17-year-old hotel worker told Nunatsiaq News.

More recently, the young woman was text messaging with the man to say she wouldn’t be at work that day.

He wrote back: “If you want I can give you all the hours that you miss I just need your head on a pillow.”

“I don’t do that,” the young woman said. “And I told him he has to respect his housekeepers.”

She still has copies of those texts.

On another occasion, the staffer was with a co-worker, a 21-year-old woman, when the two allege the man walked by while they were standing in a hallway and slapped them both on the behind.

The 21-year-old housekeeper told Nunatsiaq News the man has also propositioned her for sex on the job. She says the man has made a number of sexually explicit remarks and once tried to put her tip money into her bra.

Both women who spoke to Nunatsiaq News said that other members of the housekeeping staff have also complained of harassment, but few have reported the incidents out of fear of losing their jobs.

The 17-year-old housekeeper finally went public last week and posted a text message exchange between herself and the manager on social media. She’s since quit her job at the hotel and reported the incidents to local police.

The Kativik Regional Police Force said June 28 that the force could not confirm if there was an investigation into those allegations.

The manager is no longer employed at the hotel. Sources say he was fired June 22, although Nunatsiaq News could not reach the local co-op association to confirm why the manager left.

In Nunavik, the Fédération des co-operatives du Nouveau-Québec (FCNQ) oversees co-ops in the region, although staffing issues are the responsibility of local co-op boards.

FCNQ spokesperson Emanuel Lowi said the organization was made aware of the allegations, but it was Puvirnituq’s local co-op association that would have taken action against the employee.

“We do provide guidance to the co-ops on all kinds of issues, including this kind of issue, which we have no tolerance for in 2016,” Lowi said.

The FCNQ encouraged any hotel staff who face similar harassment to report the incidents to police.