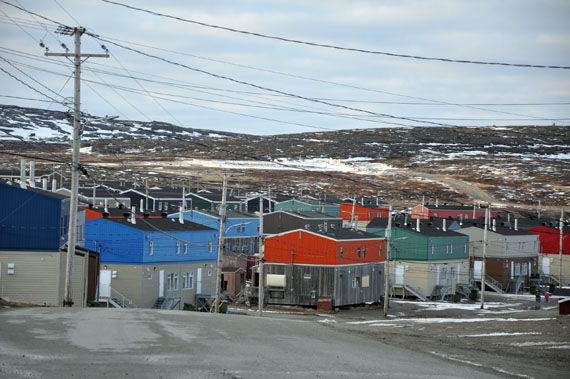 The KMHB says that 33 of its tenants were evicted from homes in seven different communities over the last few days, including some in Inukjuak, pictured here. (PHOTO BY SARAH ROGERS)

The Kativik Municipal Housing Bureau says that 33 tenants have been evicted from social housing in response to court-ordered notices to pay up or get out.

Quebec’s rental board, the Régie du logement, sent out final notices to 68 non-paying tenants last week, giving them a final chance to pay a portion of their rent.

Among the tenants facing eviction this year, the amount of rent owing varies from about $1,300 to more than $55,000.

The KMHB asked those tenants to pay at least 10 per cent of rent owed in order to remain in their housing.

By the beginning of this week, bailiffs had evicted 33 non-paying tenants in seven different communities, the KMHB said.

Nunavik’s social housing agency took a break from its eviction process in 2017 to develop a new strategy to help tackle the growing arrears, or unpaid rent, across the region.

In early 2018, the KMHB launched its Pay Your Rent campaign, which sent staff to visit non-paying tenants in person to offer advice and support on how to catch up on rent payments.

In August, Quebec’s rental board called any remaining non-payers to appear at hearings held in each of Nunavik’s 14 communities.

From a group of roughly 400 who took part in those hearings, the KMHB whittled down its list, removing elders and young families, to a few dozen tenants the agency found demonstrated the ability to pay rent, but hadn’t.

Evictions are a relatively new practice in Nunavik, where the vast majority of residents live in social housing.

And in a region facing a major housing shortage, evictions are considered controversial. On one hand, evicted tenants have few other choices for housing; on the other hand, there are hundreds of Nunavimmiut on wait lists for social housing.

Social housing tenants in Nunavik pay anywhere between $400 and slightly more than $800 in monthly rent, depending on the size of the home and the family’s income.