Court orders province to accommodate intermittent sentences in the region 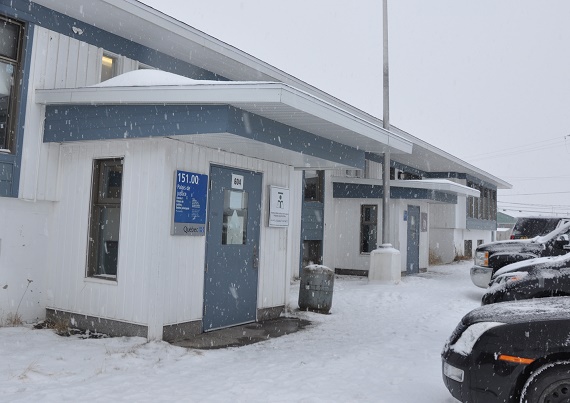 Nunavik does not have its own detention centre, apart from detention cells in the region’s police detachments and a limited number of cells in its courthouses, such as the Kuujjuaq courthouse, pictured here. A new Quebec court decision calls on the province to create local facilities for Nunavik inmates to serve intermittent sentences. (PHOTO BY SARAH ROGERS)

A Quebec Superior Court judge has ruled that a Kuujjuaq woman does not have to complete a jail sentence until the province can provide a facility for her to serve an intermittent sentence in Nunavik.

In September 2017, Suzie Jonas pleaded guilty to a charge of driving under the influence, for which she had been arrested days earlier in Kuujjuaq.

A judge sentenced her to 40 days of detention, less the nine days of equivalent time she had spent in custody.

But when Jonas’ lawyer requested that the woman be able to serve that sentence intermittently—over the weekends—the judge refused, noting the facility where Jonas would be detained was located more than 1,200 kilometres away.

Jonas began serving her sentence on Sept. 28, 2017, but appealed the decision and was released on Oct. 12, with just three days left to serve.

The appeal argued that Nunavik detainees do not, but should have, the same rights as other detainees who have access to facilities to serve intermittent sentences for minor offences.

“The Inuit and other inhabitants of Nunavik have the same rights as other citizens of this country,” Grenier wrote in the French-language decision.

“A citizen of Kuujjuaq or elsewhere in Nunavik who is sentenced to an intermittent sentence must go to Amos at his own expense to serve his sentence, which is practically impossible.”

Grenier said Quebec’s Ministry of Public Security—responsible for the detention of inmates—had neglected to follow the examples of other jurisdictions by creating adequate institutions or special jails.

In an affidavit submitted to the court, a director of correctional services in the Magdelan Islands provided an example of detainees from that region who were flown back and forth from a Gaspé area jail to serve weekend sentences, at the expense of the province.

As a result, Jonas’ sentence was suspended until the province can designate appropriate facilities for weekend inmates in Nunavik, Grenier said.

The court gave Quebec’s Ministry of Public Security six months to comply or it would order a stay of proceedings in Jonas’ file.

But the decision raises questions about how such facilities could operate in Nunavik, which is home to 14 communities accessible only by air.

The financial and emotional cost caused by the distance between Nunavik and the southern detention facilities where Nunavimmiut detainees serve their time was also highlighted in a report prepared by Quebec’s ombudsman in 2016.

The region was on track to have its own jail in the early 2000s. It would have been a 40-person provincial detention centre built in Inukjuak for $40 million.

In 2002, the Sanarrutiuk deal signed between Quebec and Nunavik on economic development would have seen Quebec pay more than $360-million in tax-free, indexed transfers to Nunavik over the next 25 years. It also called for a detention facility, in line with Section 20.0.25 of the James Bay and Northern Quebec Agreement, which says “Inuit should not be, unless circumstances so require, detained, imprisoned or confined in any institution below the 49th parallel.”

But that deal was amended in 2006, relieving Quebec’s obligation under the JBNQA to build the jail. Instead, the province offered Makivik Corp. and the Kativik Regional Government $10 million a year until 2030, indexed and tax-free.

Ungaluk, the program that manages that fund, hands out that funding each year to different crime prevention initiatives around the region.