“They’re not understanding that we are subsistence harvesters” 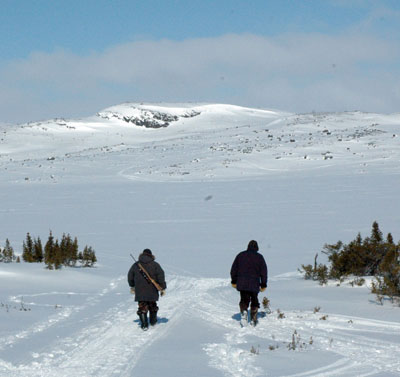 Hunters head out onto the land outside of Kangiqsualujjuaq. New legislation requires all of Quebec’s firearms owners to register their weapons, but Makivik Corp. maintains Inuit should be exempt. (FILE PHOTO)

Starting Jan. 29, gun owners across the province must register their weapons through a provincial database, though they have a one-year grace period to do this before they are penalized.

But Makivik Corp. maintains that Nunavik Inuit should be exempt from the registry because of their distinct rights as harvesters.

“We’re not denying the safety factor,” said Adamie Delisle Alaku, vice-president of resource development at Makivik. “But they’re not understanding that we are subsistence harvesters.

“We have to adapt and that’s why we’ve asked for the exemption.”

When the province’s legislation was first tabled, Makivik submitted a brief to the legislative committee studying the bill in 2016, which said that Inuit rights enshrined in their land claim agreement should exclude them from Quebec’s registry.

“Inuit hunters cannot be over burdened by bureaucratic measures that may penalize the exercise of their right to harvest under the James Bay and Northern Québec Agreement,” the brief said.

Even beyond Nunavik’s land claim, Delisle Alaku said the registry is simply inaccessible to Nunavimmiut, the majority of whom don’t speak French, though owners can register their firearms in English.

“They need to be able to accommodate unilingual hunters,” he said.

Delisle Alaku acknowledged the need to teach Nunavimmiut the proper use and storage of their weapons.

But he said a newer generation of hunters are buying and registering their weapons and taking gun safety courses offered through the Kativik Regional Government.

Nunavik’s MNA, Jean Boucher, said he hopes the one-year grace period will give his government the time to accommodate Nunavik’s gun owners.

Boucher said the province would like to see the registry managed by a regional organization, which could do outreach to gun owners across Nunavik.

“We know that gun use is different in the region,” he said. “And we don’t want Nunavimmiut under infraction because they own guns. It has to be explained in Inuktitut.”

Boucher said he’s been in contact with both the Kativik Regional Government and Makivik about creating a local office to oversee the registry. But Quebec has not considered offering an exemption to the region, he noted.

“There are many gun-related incidents in the region,” Boucher said, “and the police need that information.”

Canada’s federal gun registry was born in the years following the 1989 École Polytechnique massacre, when 14 women were shot and killed in their Montreal classroom.

But that registry was dismantled in 2012 by Stephen Harper’s Conservative government.

Quebec then tabled legislation to create its own registry, which passed in 2016.

The Quebec government has since fought to keep its own records from the federal registry, which was set to be destroyed, though that data remains sealed pending the outcome of court challenges.

Quebec’s public security minister, Martin Coiteux, has said the registry is in place to ensure that police know who owns guns in the province and where they are located, information, he said, could “prevent so many tragedies.”