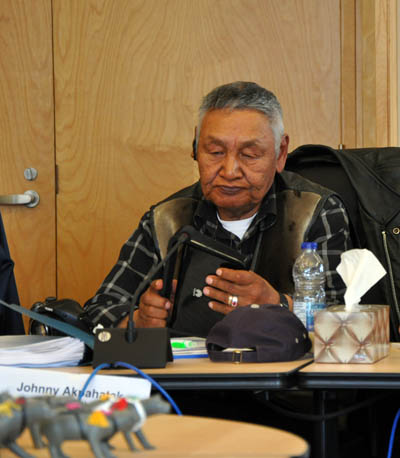 Aupaluk regional councillor Johnny Akpahatak examines the new type of modem that Tamaani will distribute to customers over the coming weeks as the company switches over to a new satellite provider. (PHOTO BY SARAH ROGERS)

KUUJJUAQ—Nunavik’s Tamaani Internet is entering the final weeks before a switch to a new satellite provider that will double bandwidth speeds for the region’s users.

Come Oct. 1, the region’s contract with Telesat ends, while Tamaani gets on board with its new provider, SES.

“You will see a major difference with this upgrade,” said Daryl Combden, who heads the Kativik Regional Government’s administration department, which oversees Tamaani.

The upgrade to higher speeds could take until the end of November, Tamaani said—the time it will take to deliver new modems to customers, needed to process the higher bandwidth.

Technicians are currently working to turn satellite dishes in each of the region’s 14 communities, in preparation to sync them with the new SES satellite.

When Tamaani makes the actual switch to the new modems, customers may see an interruption to service, although Tamaani says that shouldn’t last more than a couple of hours.

“Our priority is to keep service going as they switch from Telesat to SES,” Combden told regional councillors Sept. 12 in Kuujjuaq.

Customers in four communities, Kuujjuaq, Puvirnituq, Inukjuak and Salluit, are also getting hooked up to local fibre optic loops. That won’t deliver faster internet speeds, but will help relieve congestion on the network.

While the switch will mean a significant boost to bandwidth, the KRG is already looking ahead to its next upgrade.

With plans to have a fibre optic network in place by 2021, the regional government has commissioned a feasibility study to look into the costs and efforts involved in linking fibre optic to Nunavik’s 14 communities, Deception Bay, four communities in Nunavut’s south Baffin region and two others in Nunatsiavut.

“We’ve met with the governments of Nunavut and Nunatsiavut to see if we can double up and benefit multiple regions,” Combden said, noting the KRG is leading the study.

The Quebec government has made informal commitments to funding such a network.

But if Nunavimmiut were hoping this current communications upgrade would include region-wide cellular service, they’ll have to wait a while longer.

Makivik Corp., in partnership with Lynx Mobility, has overseen 2G cellular service in a handful of Nunavik communities since 2010 but that agreement ended at the beginning of the year.

Makivik says it won’t establish a new network, nor will Tamaani commit to it—for now.

As Tamaani installed the new technology needed to upgrade bandwidth, it also put in place the infrastructure to support 4G mobile service.

“The equipment we’re putting it in will allow us to use 4G, but we’re not there yet.”

An independent businessperson is Kuujjuaq is currently looking at setting up a local cellular network in the meantime; otherwise, Nunavimmiut won’t have cellular service in the near future.

“I think this should be a priority,” said Kuujjuaq regional councillor Sammy Koneak.