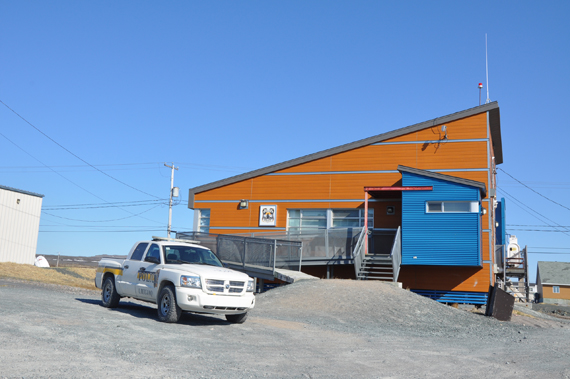 The Kativik Regional Police Force station in Umiujaq is one of nine that the KRG says is set to be renovated and enlarged, pending the province’s approval. (PHOTO BY SARAH ROGERS)

The regional government has submitted a plan requesting the construction of three new police stations and renovations to stations in the region’s 11 other communities.

The request comes a little over a year after Quebec’s Protecteur du Citoyen, or ombudsman, released a damning report highlighting violations of some of the region’s policing and justice services.

The February 2016 report focused largely on detention conditions in Nunavik noting the cells in the region were dirty and overcrowded while detainees had limited access to water, clean laundry and fresh air.

The issue is most pressing in the Hudson Bay community of Puvirnituq, which hosts court proceedings, and, at times, dozens of inmates who are flown in from the Amos detention centre, south of Nunavik, to make court appearances.

The report found cells designed to hold one or two detainees might at times hold seven. Often, those cells would contain “incompatible” inmates, some of whom might be suicidal and others, intoxicated.

So as part of its request, the KRG wants to see a new police station in Puvirnituq fitted with 13 cells plus another 15 holding cells in an adjacent court services facility.

The goal is to separate local detainees with those flown in awaiting court appearances. The increase in holding cell space would also allow officers to keep those incompatible inmates apart.

“One of the first recommendations was to have a new police station in Puvirnituq which would incorporate new cell areas,” Frédéric Gagné, the KRG’s assistant director, told regional councillors in Umiujaq May 30.

“We agree with that, on one condition: that we don’t stop at Puvirnituq.”

All of the communities’ police stations require upgrades, he said, given many of them were built almost 20 years ago.

Under the KRG’s plan, Inukjuak and Salluit, both larger communities that host court proceedings, would also get new stations with 13-cell holding areas.

The Quebec government has suggested it’s prepared to fund such a project, but the proposal first has to go through the National Assembly.

The project would have an estimated cost of about $60 million. If approved, the construction could be underway by next year, Gagné said.

In the wake of the ombudsman’s report, officials in Quebec City and Nunavik formed an advisory committee to follow up on the report’s recommendations.

Kativik Regional Police Force Chief Michel Martin said some other work has been done, largely to try and ease the expensive and time-consuming transport of detainees from Nunavik to southern correctional facilities.

Martin told KRG councillors that the KRPF facilitated more than 700 inmate transfers in 2016, at a cost of $2 million.

“This is not acceptable,” he said.

Typically, an officer must accompany inmates on a flight from Nunavik to Montreal. From there some go by van to a correctional facility in Amos—a trip which can take two to three days. Once those detainees’ court appearances are scheduled, they must return to Nunavik.

Martin said the travelling court has increased its circuits from 26 to 32 visits a year, to help cut back o the number of inmates coming in at one time.

And more Nunavimmiut inmates will be moved from Montreal-area facilities to the new detention centre in Amos, set to open later this year, a move which will cut back on some travel.

But there’s still more work to be done to help cut down on the cost and manpower required to move detainees around the province, he said.

“We’re trying to look forward here for 10 to 15 years to come,” Martin said. “The reality is that the population in increasing.”

In Nunavik communities, the KRPF is working to keep a better supply of bedding and other items needed to accommodate inmates kept in holding cells, he said.

Martin said the force is also planning to offer suicide prevention training to officers to help them identify inmates at risk and to prevent cell deaths.