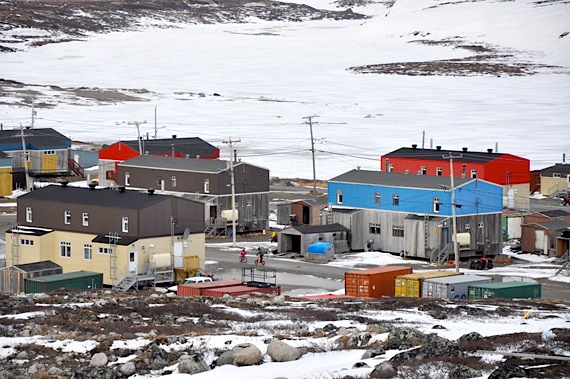 The KMHB will allocate 60 housing units to six communities considered to have the highest need — but Nunavik’s leadership said that’s not enough. (PHOTO BY SARAH ROGERS)

INUKJUAK — Kativik Regional Government councillors have approved the allocation of Nunavik’s social housing units for 2016, with 60 new homes to be built in the region next year.

But this time around, May 26, at the council meeting still underway in Inukjuak, they had fewer houses to distribute and face more uncertainty about who will pay for the construction of more social housing in the future.

That’s because the Kativik Municipal Housing Bureau has fewer units than usual to distribute in 2016 — just 60, less than half of the amount constructed in past years, which will be paid for through Quebec’s Plan Nord 2011 commitment to build more social housing.

The reason? Nunavik’s tripartite agreement with the provincial and federal governments has yet to be negotiated for the next five years..

A five-year tripartite agreement should have been approved for the years 2015 to 2020, but the parties couldn’t agree and instead opted for a one-year agreement that would allow units to be built in 2015 and leave time for more negotiations.

The KMHB will allocate 60 housing units, in duplexes, to six communities considered to have the highest need, KRG councillors heard May 26.

“In order to make it fair between large and small communities, we considered the percentage of deficit — not actual number of homes needed,” explained Watson Fournier, director of the KMHB, about the allocation process.

In Kangiqsujuaq, for example, there are currently 185 homes, but the community needs another 103 to properly house its residents, so its deficit is considered about 30 per cent.

The average deficit for the region is 22.7 per cent, Fournier said.

The KMHB arrived at that figure by collecting information from tenants at some 3,000 social housing units over the first few months of 2015.

The survey also shows that the largest need remains for one-bedroom units, meaning housing for single people or couples.

Fournier said the KMHB will verify its data before it makes any decisions on what size units to build in years to come.

In any case, Nunavik’s leadership says a housing shortage persists with no relief in sight.

“We need more than what the government offers… and they’re dragging their feet through the agreement,” said KRG chair Maggie Emudluk. “We have to fight more.”

Makivik Corp.’s secretary treasurer, Andy Moorhouse, who attended the KRG regional council meeting May 26, said the organization was expecting to receive new housing as part of the last federal budget — but didn’t.

“We’re all in agreement, we need more from the federal government to catch up with the region’s needs,” he said.