“People know me well in Quebec, but not necessarily in Canada” 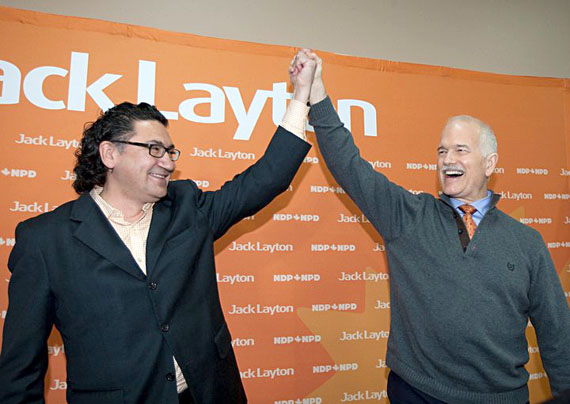 Romeo Saganash with the late NDP leader Jack Layton at a campaign event held prior to the May 2 federal election. Saganash announced Sept. 12 that he will seek the job that Layton held until his Aug. 22 death by cancer. (FILE PHOTO)

“It’s great to have Romeo Saganash in the race. Shows our team’s amazing strength. I’m looking forward to debate, and to our work ahead,” fellow NDP leadership candidate Brian Topp said Sept. 16 in a tweet.

The Abitibi Express of Val d’Or reported Sept. 16 that Saganash made his intentions known at the end of a luncheon organized by the Val d’Or Chamber of Commerce.

His short speech, delivered with emotion, about how he wrestled with his decision, ended with his announcement that he will run.

Cheers of “bravo!” broke out from the crowd.

Saganash said the decision was difficult to make, the “hardest decision” he’s taken in 25 years.

And, acknowledging that he’s not Jack [Layton], he said he wants to realize Layton’s dreams for Canada.

Saganash later told reporters that he had only reached his decision late Sept. 15 — which explains why several earlier reports, including a widely-circulated report on the website of the magazine L’Actualité, suggested that Saganash would not run.

“It’s a hard decision because I like what I am doing as MP and as natural resources critic. I’m not deciding to run for the leadership because I am going to to abandon the region and my natural resources portfolio. I’m still going to be here. No matter what happens in this race, I want people to know that I will always be there for them,” Saganash said.

Many different factors led to his decision, he said.

“I wouldn’t say that the death of Jack [Layton] led this opportunity. I regret his passing, of course, [and] and I would have like to continue on with him, but unfortunately he left us. Is this an opportunity that will occur again in five or six or seven years? Perhaps not, so why not jump in now… and, you can’t imagine how many people I have met in the streets of Val-d’Or, Chibougamou, Montreal, Ottawa or who have written me, left me messages and who thought this was a good idea.

“The candidates who will be putting their names forward will all be of a high calibre, I know that. People know me well in Quebec, but not necessarily in Canada. There’s a lot of work to be done. I thought about how I could help do my part to help my party reach its objectives, I weighed the pros and cons.”

Saganash said he will put together a solid team and that he plans to develop a plan, with his advisors, on how to move ahead.

“I’m going to continue to build bridges. That’s worked well for me for 25 years,” he said.

Sustainable development, the environment, better relations with aboriginal peoples — “these are what I have fought for over the past 25 years” — and these will continue to remain important, Saganash said.

Topp is the only other declared candidate. Outremont MP Thomas Mulcair is also expected to seek the party’s leadership, as is Ottawa Centre MP Paul Dewar.

Saganash, 49, took 45 per cent of the vote in the May 2 federal election to defeat the incumbent Bloc Québécois MP, Yvon Lévesque.

Saganash is one of 58 new Quebec MPs who rode the late Jack Layton’s coat-tails to a stunning electoral sweep in Quebec that reduced the once-mighty Bloc to only four seats.

Supporters of Saganash have already put up a Facebook page to promote his leadership.

In a statement Sept. 12, the Grand Council of the Crees said the announcement is an indication that the James Bay Crees of Eeyou Istchee are able to play an increasingly important role in national politics.

“He has deep knowledge of the issues and challenges facing the Aboriginal people of Eeyou Istchee, Quebec and Canada. He has strong relations with all the communities of his riding, both Aboriginal and francophone, and he serves them all with distinction,” Ashley Iserhoff, the deputy grand chief of the James Bay Cree, said in the news release.

The NDP will choose its next leader during a convention scheduled for March 24, 2012 at Exhibition Place in Toronto.