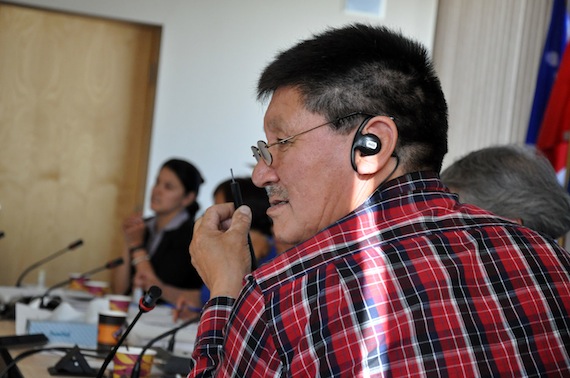 Kativik Regional Government councillor Charlie Argnak studies a piece of fibre optic cable passed around at a KRG council meeting last week in Kuujjuaq, which could possibly become the future of telecommunications in Nunavik. (PHOTO BY SARAH ROGERS)

KUUJJUAQ — Does a fibre-optic network lie in Nunavik’s telecommunications future?

That may be the best option, says a recently-released study by the Kativik Regional Government, but this would require a lot of money that the region has yet to secure.

The KRG released a pre-feasibility study for building a high capacity broadband network in Nunavik last week as part of its goal of increasing the region’s capacity 30-fold by 2021.

The study looked at meeting Nunavik’s medium and long-term needs, pegged at 2,500 megabytes and 7,400 Mbs.

According to the Canadian Radio-television and Telecommunications Communications’ most recent recommendations, Canadian households should have access to five Mbs of actual throughput.

“Our 2021 objective is the same as what Videotron and Bell were delivering in Montreal in 2011,” he told the KRG council meeting last week.“So we think our targets are very reasonable.”

To determine the feasibility of upping Nunavik’s capacity, the study looked at other broadband projects in geographically similar regions, like Greenland and the Northwest Territories, as well as the efforts of Arctic Fibre to install fibre optic cable along the Northwest Passage, part of a proposed London-Tokyo-New York network.

The study found that microwave towers, which transmit information by the use of radio waves, were cheaper and easier to build in Nunavik than the other two technologies, but the access that technology provides isn’t fast enough to meet the region’s 2021 targets.

High-speed satellite (Ka-band) could — if a new satellite is launched, providing quick deployment, excellent coverage for a slightly higher price than what the region is paying for internet now.

(Nunavik currently pays roughly $5 million a year for internet, with a Ka-band satellite connection estimated at about $8 million a year.)

But its disadvantage is its latency — the time delay in sending and receiving data.

Technically speaking, fibre optic is the best solution, Dumoulin said, even if it requires the use of one or the other technologies as a back-up in certain communities.

Fibre optic is a flexible and transparent fibre made of glass or plastic that transmits data over longer distances and higher bandwidths than other technology.

Undersea cable is considered feasible for Nunavik; in one scenario, the network would land in Chisasibi, its cable buried along the Hudson coast all the way around through Ungava Bay, with a spur line to Kangiqsualujjuaq.

But hybrid technology might work best for Nunavik, Dumoulin said.

A fibre optic network could also connect to 11 communities, while microwave towers would service Kangiqsualujjuaq, Tasiujaq and Aupaluk. That’s where Ungava Bay sees its highest tides, which could make it difficult to lay undersea cable, he said.

As part of the study, the KRG has been in communication with Arctic Fibre, a project that has proposed running a cable from Tokyo to London through the Northwest Passage and into Nunavut and Nunavik.

The project plans to run a spur down Hudson Bay to land in Chisasibi, and project developers are asking for federal money to build spur lines to Nunavik communities.

“The report definitely concludes that fibre optic provides a technologically superior solution,” Dumoulin said. “That’s where the world is going.”

The study also finds that the Arctic Fibre project is technically feasible for Nunavik, in the same range as if the region were to build it itself.

But — and it’s a big but, Dumoulin warns — there is no money earmarked for such a project.

“Broadband internet is not considered a public utility and in the North, we know that there’s no business case,” he said. “So government must provide the funds.”

Arctic Fibre’s cost structure is complicated: it’s based per year on a sliding scale depending on what the network sells, making it too difficult to price the Nunavik portion of the project.

A Nunavik-only fibre optic project is estimated somewhere around $155 million.

While in Nunavik, Quebec Premier Pauline Marois promised that her officials would look at the KRG internet report.

“I know it’s important for your communities to remain connected to the world like any other citizen wishes to do,” Marois said. 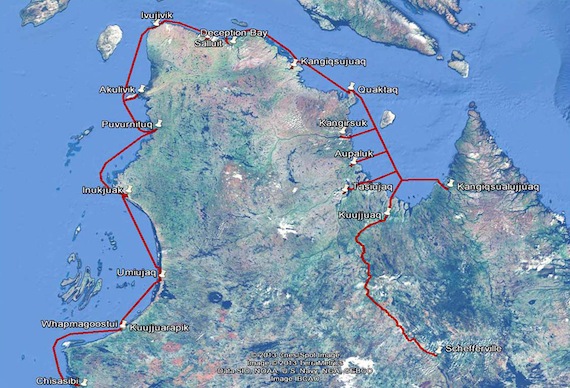 A map of one of the proposed fibre optic network routes for Nunavik, landing in Chisasibi and wrapping all the way around the ring, through to Schefferville. (IMAGE COURTESY OF THE KRG)