A Nunavik flag could inspire the region: designer

“Let’s again be reunited through our flag” 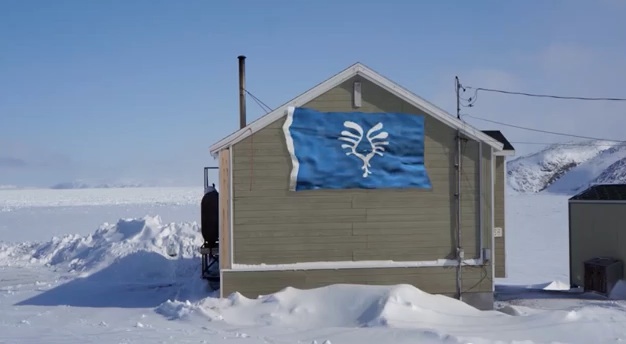 A flag is tacked on to a house in Ivujivik, designer Thomassie Mangiok’s home community. (PHOTO COURTESY OF T. MANGIOK) 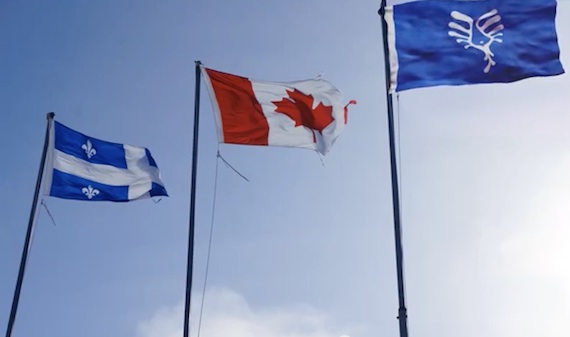 Here’s what Thomassie Mangiok would like to see: a Nunavik flag flying alongside the flags of Quebec and Canada. (PHOTO COURTESY OF T. MANGIOK)

A Nunavik graphic arts designer says the region needs its own flag.

And Canada’s flag displays the red and white maple leaf, a long-time symbol celebrating the nature and environment of what is now Canada.

So why shouldn’t Nunavik have its own distinctive flag, asks Thomassie Mangiok, who runs Pirnoma Technologies, a design and computer support company, from his home town of Ivujivik on Nunavik’s Hudson Strait coast.

Nunavik doesn’t have the self-governance, but it craves, but at least it could have a flag to remind everyone of what they want, said Mangiok, 30, who studied graphic arts at Collège Marie-Victorin in Montreal.

Nunavik wouldn’t need a vote to adopt a flag.

But it could be a powerful symbol to inspire people, Mangiok suggests.

“Their flag has a strong presence in their life, and the world knows it,” Mangiok told Nunatsiaq News.

A simple flag can serve as a medium to distribute strength, ideas and a sense of union, he said.

“Our leaders are working hard to better Nunavik. The flag should again remind the population [that] its involvement and support would only strengthen their elected leaders work,” he said.

At the recent Parnasimautik consultation meeting in Ivujivik, Mangiok presented his concept for a flag to bring Nunavimmiut closer to their “symbolic environment.”

Nunavimmiut need a symbol to direct them along the same path, he said.

“Let’s again be reunited through our flag. Let the flag remind us symbolically what are goals are and why we should achieve them,” he told those at the meeting.

The blue and white flag echoes the colours of the Quebec flag — but that’s where the resemblance between Mangiok’s flag and that of Quebec ends.

Mangiok opted for those colours because these are the chief colours found in the Arctic.

In other respects, his design is also taken straight from nature.

The design echoes shape of a bird, with feathers reaching the sky to show self-governance and freedom, Mangiok said.

Both sides of the design promote equality, with dot representing a head, “a mind fully supported by the body,” while the top looks a bit like a person’s hands reaching upwards.

The design also evokes the shape of a caribou antlers.

Mangiok hopes such a flag could help overcome the geographic and cultural isolation many feel, referring to a statement in Plan Nunavik which says that Nunavik “has suddenly lost the points of reference provided by its traditional lifestyle, and this loss has greated a wide gap between the generations.”

The flag would set “renewed goals for our identity, capability and independence,” Mangiok said at the language conference.

“We can reunite Nunavimmiut and have a greater strength,” he said.

The reception was positive, he said.

Now, the region’s various organizations will consider his proposal.

Nunavik communities and organizations do have their own flags — for example, the Kativik Regional Government flag features 1970s-style syllabics for Nunavik shaped into a map of the region, while Makivik Corp.’s flag shows a stylized airport worker signaling an aircraft.

Mangiok has designed other logos for Nunavik organizations, such as the eye-catching black bird for Nunavik Parks.

And he has promoted, produced and posted other online tools to encourage people to speak and use Inuttitut.