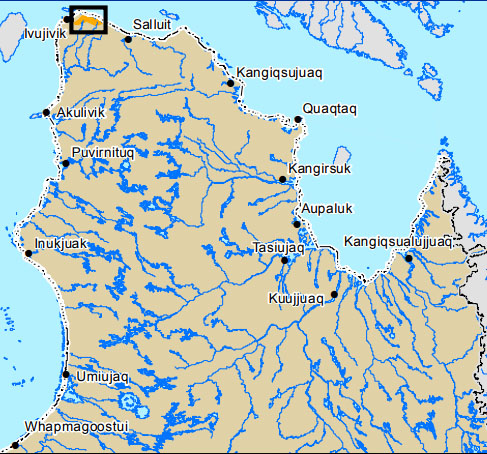 This map shows the location of Iluiliq park, an area that spans a part of the Hudson Strait between he communities of Ivujivik and Salluit. (IMAGE COURTESY OF MFFP QUEBEC) 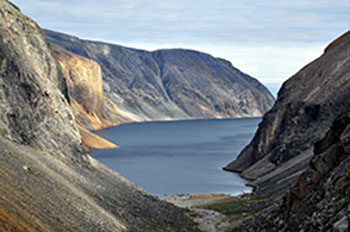 The sweeping fjords along Hudson Strait are some of the more dramatic scenery within Nunavik’s newest proposed park area, Iluiliq. (PHOTO COURTESY OF MFFP QUEBEC)

Environment officials in Nunavik are making strides to finalize the creation of the region’s fifth provincial park, or parc national in French.

An area of sweeping cliffs along Nunavik’s Hudson Strait, called Cap Wolstenholme, has long been flagged as potential park land.

The 775 square kilometres of park space is meant to protect the landscape of Quebec’s northernmost tip including its rare plant species, walrus habitat and one of the world’s largest colonies of thick-billed murre, which nest along the region’s cliffs.

The park area is also home to a number of archeological sites, including old Inuit camps and a Hudson Bay Co. trading post.

The KRG and Nunavik Parks are currently working on a status report on the proposed park, the regional government said this week.

The creation of the work is lead by the Parc national Iluiliq Project Working Group, made up of government officials and community members from neighbouring Ivujivik and Salluit.

Guides from both those communities helped to lead a fieldwork campaign in the park this past summer to look at the recreational potential of the future park.

Nunavik is now home to four established parks: Pingualuit, Kuurujuaq, Tursujuq and most recently, Ulittaniujalik, which was made official in 2016.

While Nunavik’s parks are managed by the Government of Quebec, they are operated by the KRG’s Nunavik Parks.

And with the growth of the region’s park areas, Nunavik Parks is seeing more and more visitors to the region.

So far in 2017, Nunavik parks have welcomed more than 700 visitors—more than double the number the parks saw in 2016.

The Nunavik Park Beneficiary Access Initiative helps to encourage Inuit visitors from within the region by offering funds to cover airfare, lodging and other services offered within the parks.