“I felt really proud for our whole community” 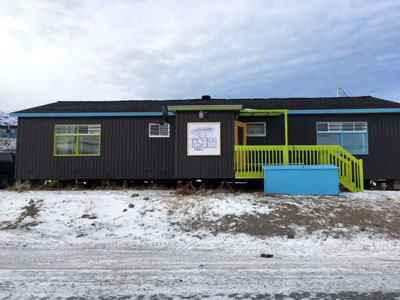 Qarmaapik House in Kangiqsualujjuaq is a former bed and breakfast, renovated earlier this year to provide space for family activities. (PHOTO COURTESY OF E. ANNANACK) 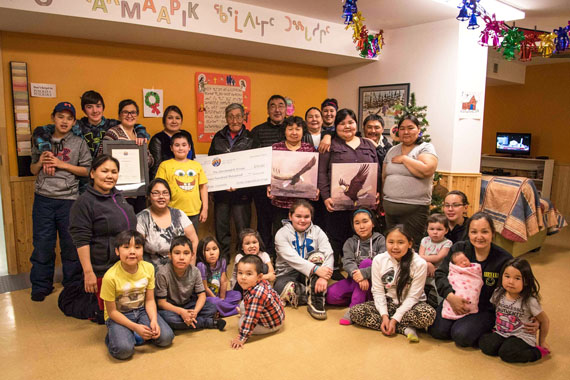 Qarmaapik House staff and clients pose last week in Kangiqsualujjuaq with the group’s $700,000 cheque from the Arctic Inspiration Prize. (PHOTO BY MARK BRAZEAU) 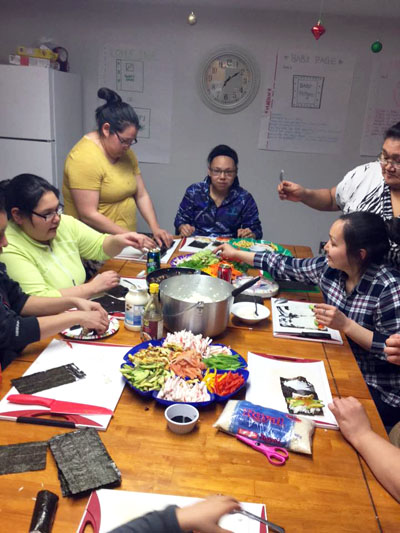 The coordinator of Qarmaapik House—one of the finalists of this year’s Arctic Inspiration Prize—sat nervously in her seat at the Winnipeg gala earlier this month, clutching the hands of co-workers and board members of the Kangiqsualujjuaq family safe house.

By the end of the evening, the group was beaming on stage, holding a cheque for $700,000, the top Arctic Inspiration Prize amount and the first win for a Nunavik-based project.

“I could feel it,” Annanack said, describing the anticipation that night.

Andrea Brazeau, a youth leader from Kangiqsualujjuaq, co-hosted the Dec. 8 event with former Olympian Clara Hughes. Annanack said there was something in Brazeau’s voice that convinced her Qarmaapik would win.

“I felt she was going to say our name,” Annanack said. “And she did. I felt really proud for our whole community, and really emotional.”

Qarmaapik House opened its doors in March 2016, the second safe house established in the region, with a goal of building healthier families.

The idea is part of a larger project to restore peace to Nunavik’s 14 communities.

But the idea of a safe house appealed to community leaders in Kangiqsualujjuaq, who were seeing high numbers of children singled out and taken in by youth protection in the village of 900.

The team of community health and social service providers, elders and educators wanted to address the depression, addiction, post-traumatic stress and even incarceration that has prevented some parents from meeting their children’s needs.

Less than a year since it was established, Qarmaapik is still developing its services, focusing on developing parenting skills and family bonds.

Currently the centre offers two main programs: a twice-weekly community kitchen, where residents can come and learn to prepare healthy meals, and regular baby book workshops, where parents can come and map out their children’s stories.

“We’ll have many more projects in the future with the money we have,” Annanack said.

The $700,000 cheque more than doubles the funding the safe house was receiving from the Nunavik Regional Board of Health and Social Services and the Kativik Regional Government, Annanack said, and will go a long way toward helping the centre maintain its 13 staff members, all of whom are Inuit.

Qarmaapik already employs a counsellor, but the centre hopes to expand its counselling services.

Annanack said staff are working to coordinate family outings and excursions starting in 2017, along with the installation of security cameras to secure the home.

The house, a former bed and breakfast, was donated by the community’s landholding association and renovated with help from the KRG.

Along with its kitchen, office and workshop space, the home includes four bedrooms with 10 beds and a secure area, which Annanack calls a “really happy space” filled with artwork.

That lends itself to Qarmaapik’s most important plans: the centre is currently negotiating an agreement with Nunavik’s department of youth protection, its health board and police force to intervene on families in crisis. The goal is to bring children and families into the safe house to prevent children being placed into foster care.

“We’ve been working on this since March,” Annanack said. “As an Inuit community, this would be a first, maybe in all of Canada.”