Makivik Corp. points to obligations under the JBNQA 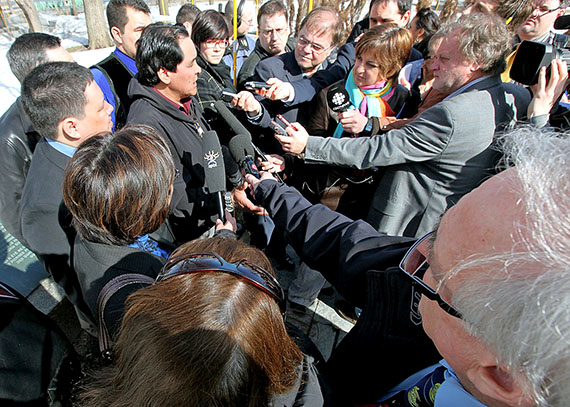 Pita Aatami, president of Makivik Corp., is surrounded by journalists at a March 2010 press conference in front of the National Assembly building in Quebec City, where he blasted the federal government for not making good on a promise to build the 1,000 new social housing units that he says Nunavik needed — and still needs today. (FILE PHOTO)

Makivik Corp. President Pita Aatami says talks with the federal government on more housing for Nunavik have hit a standstill.

But those talks may get help from a mediator in 2012, he said.

Since 2010, Nunavik’s leaders have pegged the number of additional units needed to relieve the housing crunch in the region at 1,000 – a need that continues to grow.

So when Quebec’s Plan Nord announced 300 new social housing units earlier this year — plus help to build 200 private homes — the province approached Ottawa to come up with another 500 units.

But now Ottawa has told Nunavik that it has already met its housing obligations to the region until 2015, Aatami said.

“The federal government is saying that it’s fulfilled its obligation over the last 10 years,” Aatami said. “But we’re telling them it doesn’t meet our needs. If this situation existed in the South, it wouldn’t be tolerated.”

Aatami said housing in Nunavik remains a shared responsibility between the federal and provincial governments, according to the James Bay and Northern Quebec Agreement, whose Sec. 29 says “the existing provision of housing, electricity, water, sanitation and related municipal services to lnuit shall continue, taking into account population trends.”

The most recent of three, five-year housing agreements between the governments of Canada and Quebec and the Inuit of Nunavik will build 350 units in the region by 2015.

But that’s not enough to house Nunavimmiut in need, Aatami said.

Aatami plans to meet with federal officials again this week, but he believes the two parties will require help to resolve the dispute.

Aatami said he hopes a mediator will be named to help the two sides in January, 2012.

Nunavik leaders say they’ve been waiting on a commitment from the provincial and federal governments to deliver on 1,000 social housing units since March 2009, when all three levels of government were scheduled to gather at a Montreal housing forum.

The forum was cancelled, however, and put off indefinitely.

The first five-year Nunavik Housing Agreement was launched in 2000 and has been renewed twice. Under the 2000-2005 and 2005-2010 agreements, roughly 530 units have been constructed in Nunavik.

Together with the 2010 renewal of a five-year social housing agreement, plus the 300 social housing units promised as part of Quebec’s Plan Nord, Nunavik can expect 640 units to be built across the region by 2016.