Nunavik Sivunitsavut is a go 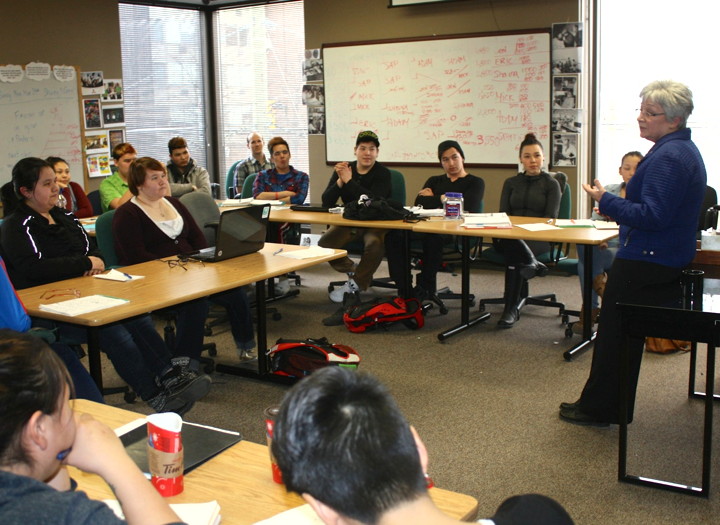 Nunavik leader Mary Simon speaks to students at the Ottawa-based Nunavut Sivuniksavut in 2014. The Kativik School Board is working to launch a Nunavik version of the program in Montreal for 2017. (FILE PHOTO)

Nunavik Sivunitsavut, modeled after the successful Ottawa-based Nunavut Sivuniksavut, is now slated to begin delivering classes in the fall of 2017.

That’s thanks to a $666,000 grant through the federal Post-Secondary Partnerships program, a federal fund that supports Indigenous-focused curriculum.

“We’ve been working on this project for a very long time,” said Kativik School Board chair Alicie Nalukturuk, adding that the program responds to a long-time need identified by Nunavik youth.

The KSB first announced plans in 2010 to open a Nunavik version of the program with the goal of offering Nunavik students a chance to learn their history and gain cultural knowledge in an accredited and urban setting.

“I think it will really enforce their self-esteem… and really instill pride in the students’ self-identity,” Nalukturuk said.

“It’s important for young people to gain that positive self-identity in order to pursue different things in their lives.”

The program itself will be accredited through John Abbott College in the Montreal area, which already hosts the majority of Nunavik’s post-secondary students who choose to study in English.

But Jason Annahatak, the KSB’s director of post-secondary services, said the new program won’t be based at the John Abbott campus.

“Space is a major issue,” Annahatak said. “We also want to make sure this program has its own identity.”

School board officials are in talks with Nunavik’s Avataq Cultural Institute to host the program at its downtown Montreal offices. The venue makes sense for its central location, Annahatak said, as well as for the wealth of Inuit cultural resources that students will have access to.

The program is also expected to have a Nunavik-based component.

The KSB is currently developing curriculum for the 12 courses Nunavik Sivunitsavut hopes to offer in 2017—most of which will be credited.

Registration has yet to open, but the program expects to offer spaces to between 10 and 15 students in its inaugural year, Annahatak said.

Students will be eligible for the same benefits administered by the KSB for other post-secondary programs outside the Nunavik region.

There is also a community outreach component that helps students prepare cultural presentations to different groups around the city.

As a pilot project in 2009, the KSB enrolled two Nunavik students into the Ottawa-based program.

“NS was, hands down, the best thing I’ve ever done for myself,” said one of those students, Janice Grey-Scott, at the time.

“I learned more about myself as a person, as a young Inuk and as someone within a larger political context, in terms of land claims and the impacts of them.”

In addition to the federal contribution, Nunavik Sivunitsavut will operate over the next two years with funding from regional organizations like the Kativik Regional Government and Makivik Corp.

Although the Quebec government pledged support for the new program through its Plan Nord, the province has yet to announce any funding.