“A comprehensive vision of regional development” 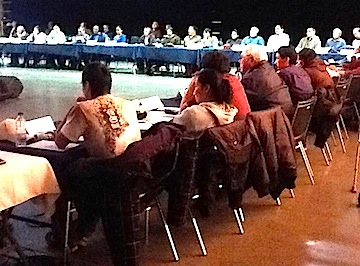 Representatives from each Nunavik community and the region’s major organizations gathered last November to draft a declaration for the future direction of the Nunavik government. (FILE PHOTO)

This past week, on Sept. 5 and Sept. 6, only days after the election of a new government in Quebec, the leaders of Nunavik’s regional organizations got together to kick-start an 18-month process to produce a home-grown development plan, called Parnasimautik, “what you need to be prepared,” for Nunavik.

The main topic of discussion during the two-day meeting: Plan Nunavik, (in Inuttitut, the Parnasimautiliaq Nunavimmut or “that which has been developed for Nunavik”), the region’s response to the defeated Liberal government’s Plan Nord development plan for northern Quebec.

Plan Nord will survive the change in government. The newly-elected Parti Québécois government intends to pursue Plan Nord, but with more involvement by people in Nunavik, said the re-elected PQ MNA for Ungava, Luc Ferland.

They agreed that the direction and pace of development in Nunavik must be decided by Nunavimmiut and, for this purpose, the process they have called Parnasimautik must continue.

In a statement released at the end of the meeting, they said that “the leaders of the region’s organizations wish to partner with Québec to build the Nunavik of tomorrow, where residents benefit from the same level of services and have access to the same employment and business opportunities as other Québecers, with a similar cost of living.”

The statement said that Parnasimautik consultations should create “a comprehensive vision of regional development according to Inuit culture, identity, language and traditional way of life so as to protect them now and enhance them for the future, and to protect the environment.”

These consultations will involve presentations to regional organizations over the coming months and community workshops beginning in 2013.

The consultations will give elected representatives, local organizations and residents an opportunity to discuss the challenges of development, the statement said.

Meeting participants agreed to collaborate in the Parnasimautik consultations and to contribute financially, “each organization in its own capacity.”

From now until the end of the year, information sessions will take place, followed by community workshops from June to July and community meetings to “stimulate discussion of the local vision of development.”

Delegates to the Makivik annual general meeting will receive an interim report, and all the organizations plan to review it next September.

Early in 2014, they’ll finalize the document on the Parnasimautik consultations and its “consolidated regional vision of development” which will be presented at that year’s Makivik AGM.

Last November, a three-day meeting took place in Kuujjuaq when many of the same people met to talk about Nunavik governance after the Nunavik Regional Government model was rejected in a region-wide vote held in April 2011.