An English translation by Nunatsiaq News of an article on education in Puvirnituq, published Feb. 27 in La Presse 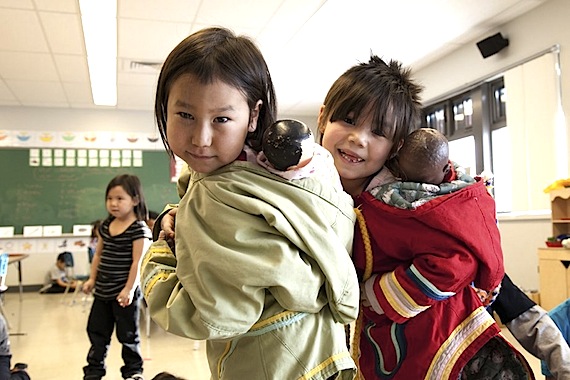 These girls in a Puvirnituq kindergarten class play with dolls, putting them in their amautiks. (PHOTO COURTESY OF LA PRESSE)

PUVIRNITUQ — In June, when a handful of Secondary Five students climb up on the podium, dressed in gowns and wearing mortarboard hats, the whole village is in the school gymnasium to celebrate with them.

A high school diploma is a source of great pride.

At 34, Lucy Aupalu doesn’t regret having persevered. But she dropped out of school twice, and she did get support from her mother, who raised her alone.

“I think this diploma has given me more independence than many people of my generation,” the teacher says today.

But Aupalu didn’t not stop there. The mother of three also trained to be recognized as a qualified teacher. After 10 years of work, Aupalu just obtained her first certificate.

The young girl is studying French. A choice made by her parents who want her to have more opportunities. This is a third language for her. “I try to help her with her homework, but it’s hard. I do not speak French,” says Aupalu.

The issue of language is important in this isolated corner of the Quebec. Classes are offered in Inuttitut from kindergarten to Grade 3. After that, all education takes place in a completely different language.

A school principal for 29 years, Aipilie Kenuayuak looks proudly at children in kindergarten. It’s a period of free play. Girls play at being mothers. They install a doll in the hoods of their parkas, like their mothers.

As he approaches retirement, the principal still hangs on to a dream. He would like all elementary school teaching to take place in Inuttitut.

“I am not satisfied with what I see now. I see that children learn much from kindergarten to Grade Two. But in the third year, when we introduce a second language, learning slows down considerably,” he says.

But to succeed, they need more qualified Inuit teachers — and these are rare. Like many of his peers, Kenuayuak believes that the salvation of his people may lie through the construction of a college in Nunavik.

Students who persevere and who want to pursue a post-secondary education must now go into exile in the South.

They leave their community of a few hundred inhabitants, where snowmobiles rule, to go to Montreal. A profound uprooting. In addition to homesickness and the shock of the city, young people face significant difficulties in school.