“The region is saying: we really need this” 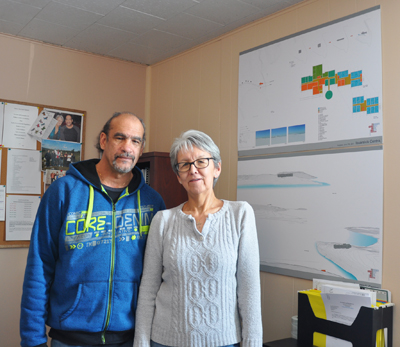 Grayling Malaterre, Isuarsivik’s clinical supervisor, left, with Mae Saunders, the centre’s executive director, standing next to architectural plans for a new treatment centre that has been years in the works. (PHOTO BY SARAH ROGERS) 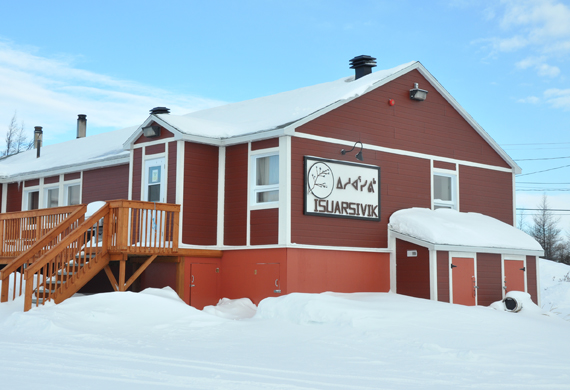 Kuujjuaq’s Isuarsivik treatment centre is housed in a 70-year building, with room for just nine clients at a time. The non-profit organization hopes to see a new and expanded centre built in the next year. (PHOTO BY SARAH ROGERS)

KUUJJUAQ — Kuujjuaq’s Isuarsivik treatment centre has plans to expand its services by way of a new facility that could open as soon as 2017.

It’s a project that’s been years in the works, but the independent, non-profit organization that runs the centre says it’s trying to secure the last of $20 million in contributions that the centre needs to build the new 21-bed facility in Kuujjuaq’s Nuvuuk Bay neighbourhood.

Isuarsivik is currently housed in a 70-year-old building, formerly used to house United States armed forces during the 1950s, with only three bedrooms designated for clients.

“The region is saying: we really need this,” said Grayling Malaterre, Isuarsivik’s clinical supervisor. “This has been in the works for 10 years now. We’re being told the ground-breaking could be in a year.”

A new facility would allow the centre to more than double its clientele from the maximum of nine people it can take at once, to 21 clients, who would each have their own rooms during the six-week treatment cycle.

Under the new plan, Isuarsivik would have the funding and space to host an on-site psychologist and nurse, and the ability to offer family therapy.

“We want to make it more of a community centre,” said Isuarsivik’s executive director, Mae Saunders, “where families have better access, where they can come take part in events, like Christmas games.”

Currently the centre is funded through the Nunavik Regional Board of Health and Social Services ($600,000 in 2015-16), along with the Ungaluk crime prevention fund, through neither funding source is permanent.

The facility is small but comfortable, with a living room, dining area and classroom for clients.

Isuarsivik also organizes outings on the land to hunt or pick berries, and brings in elders to speak to clients.

After six weeks, clients take part in a graduation ceremony. Isuarsivik “graduates” between 40 and 45 sober clients every year.

Dear Alcohol: I’m Tired of You

The centre is quiet on a recent Sunday morning — it’s the last week of a six-week cycle, and clients are out on a day pass.

Saunders sips coffee and walks through the centre’s hallways, showing artwork and poetry created by clients over the years.

Saunders’ role as director didn’t come easily. She herself went into treatment at Isuarsivik in 2002. Once she completed the program, the centre hired her as administrative assistant, promoting her to more senior roles until she was appointed director in 2008.

Alongside the artwork posted on its walls, some former clients have written letters to their addictions, such as this one:

Other posters have collages pasted, showing the clients future plans, which are full of images of family and travel and wealth.

The 2004 Nunavik Inuit health survey found that a quarter of respondents reported high alcohol consumption, considered five or more drinks on the same occasion, at least once a week over the last 12 months.

And 60 per cent of respondents reported drug use at some point over the last 12-month period.

Police statistics suggest that more than 70 per cent of crimes committed in the region are linked to drug and alcohol abuse.

Malaterre says Isuarsivik’s clients are generally addicted to both drugs and alcohol. Many clients are also dealing with mental illness.

News of a new facility comes at a time when the only other Inuit-specific treatment centre in the country has announced its closure.

The Ottawa-based Mamisarvik Healing Centre residential treatment program said earlier this month that it will close its doors in March due to a funding shortfall.

That centre has treated more than 600 Inuit from Nunavut and the Ottawa area since it opened in 2003.

Isuarsivik now only treats beneficiaries of the James Bay and Northern Quebec Agreement, although staff have already fielded a call about a potential Nunavut client, and expect to receive more.

Mamisarvik’s closure is a major blow to addictions and trauma treatment in the North, Malaterre said.

The Isuarsivik centre is not currently accredited, Malaterre said. Once it is, Isuarsivik could be open to treating Inuit clients from Nunavut and other regions.

But even with an expanded centre, he noted, there is still a need for treatment services elsewhere in the North.