An English translation by Nunatsiaq News of an article on child care centres in Nunavik, published Feb. 26 in La Presse 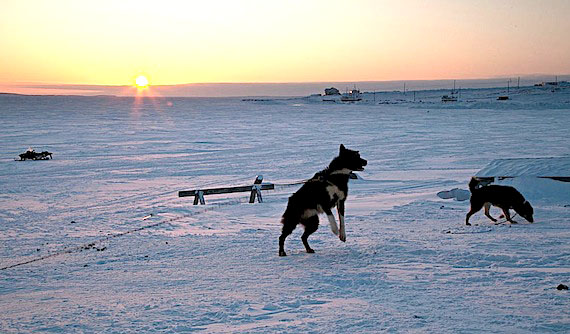 Kids who attend the Quebec government-subsidized network of child care centres in Nunavik eat local foods and learn what they need to know to live in the North. “Here, educators don’t tell the story of Snow White and her wicked stepmother. Instead, on this vast land where the tundra is king, the tales educate children and warn them about the dangers that surround them,” writes Pascale Breton of La Presse in her series on Nunavik, now available in English at Nunatsiaqonline.ca. (PHOTO COURTESY OF LA PRESSE)

Caribou, seal and Arctic char are back on the menus of child care centres in Nunavik. One way, perhaps, to contribute to the development of children.

Almost one in five Inuit children lack iron. That’s a deficiency that can affect their development and even cause learning disabilities when they start school. In recent years, child care centres have been are involved to trying to change this.

New menus with more traditional food — rich in iron — were designed. That’s just one initiative among many others.

“In the child care centres, we look at the major problems affecting children and use our services to improve these factors, if we can,” said Margaret Gauvin, director of the department that’s responsible for child care within the Kativik Regional Government.

The child care centre program puts a focus on Inuit culture and language. Here, educators don’t tell the story of Snow White and her wicked stepmother. Instead, on this vast land where the tundra is king, the tales educate children and warn them about the dangers that surround them.

History books and activity books were created specifically for children in Nunavik, in Inuttitut.

Children learn that caribou on their plate was first hunted and butchered. That white foxes can carry rabies. That they need to watch out for speeding snowmobiles before crossing the road.

Child care centres also enrich the economy of villages by creating jobs, said Gauvin. Parents feel safe leaving their children. “This security allows parents to stay in their jobs or get more education to get a better job.”

The 16 existing facilities are also filling up. Many parents can’t get a place for their children. Some 240 additional places will be created soon in five new child care centres.

A program tailored to the needs of the North, offered only in Inuttitut, was created to train educators. Few had a high school diploma, much less a degree in child care.

With this customized training, 250 women received a college-level certificate. But there’s still much work to be done to train all educators.

Despite its success, the child care centre network is not immune to a problem that affects all sectors of activity in Nunavik: absenteeism.

Traditionally, Inuit lived from day to day. For whatever reason, because they don’t feel like it, there are problems at home, or because they want to go hunting, many Inuit still do not show up for work in the morning.

When a teacher is absent, the repercussions are felt throughout the community. Parents can’t go to work.

“There is a problem,” admits Gauvin. “In some child care centres, educators are late or don’t show up. We haven’t found a solution.”

Nunatsiaq News will continue to print translated articles from the recent La Presse series. See The Inuit tragedy: a northern dead end, published March 1, and The Inuit tragedy: Nunavik drops out, published March 2 on Nunatsiaqonline.ca. For reaction to the series, go to a Feb. 29 Nunatsiaqonline.ca story Quebec newspaper articles outrage many Nunavik Inuit and to a March 2 story La Presse responds to complaints about its Nunavik coverage .