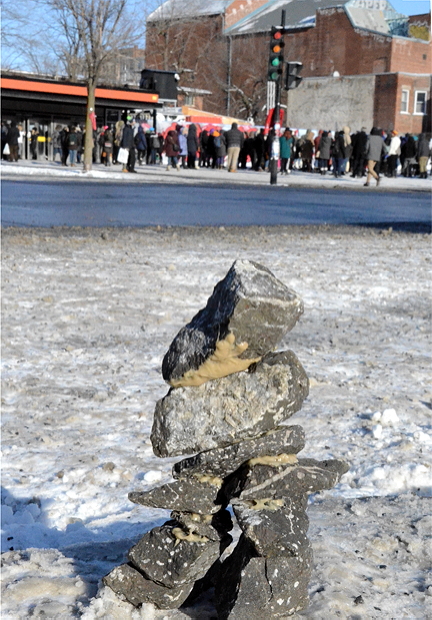 Here’s one inuksuk that marked the way where hundreds of Montrealers marched on Feb. 14 for the seventh annual memorial march to honour the lives of missing and murdered Indigenous women. (PHOTO BY DAVID MURPHY)

Lucy Annanack, who braved -25 C Arctic-like weather for the march, started the inuksuit project with one goal in mind.

“So we can be recognized and heard,” she said on the icy Montreal sidewalk, while droves of people holding signs of support and playing traditional drums walked past.

About 200 participants walked a few blocks up St-Laurent for the march on a route that was abbreviated this year because of cold weather.

Annanack is hoping to make 1,200 inuksuit to symbolize “the 1,200 missing [Aboriginal] women reported.”

With the help of about 50 volunteers from Montreal-based facilities such as the Ivirtivik Centre, Project Autochtones du Quebec and the Native Friendship Centre, 400 inuksuit were prepared for the march on Valentine’s Day.

Annanack hopes to put the inuksuit in Cabot Square this summer.

“So far we have 400 done and we’re still going to keep the project going for Cabot Square for June 21, Aboriginal Day,” Annanack said.

Installing the inuksuit at the square for a day, or an event this summer, is something Cabot Square project manager Rachel Deutsch is excited about.

“We just really want to honour the people who have history in that park as much as possible,” Deutsch said.

Cabot Square has been an important gathering place for Inuit for decades.

Projects like Annanack’s are important for recognizing the issue of missing and murdered Indigenous women, Deutsch said.

“Seeing inuksuit is cool because it makes people ask: ‘why this?’ And then we can explain,” she said.

And works of art like Annanack’s are also needed now more than ever.

“Coming out of the Truth and Reconciliation Commission and the inquiry [into missing and murdered Indigenous women], we have a need for artistic expression to process this,” she said.

“On the one hand these projects are fantastic. And we also need to do concrete actions. So I do work very closely with police and several partners on how they can better respond when people go missing.”

Geta Etorolopiaq, a carver from Iqaluit, was one of the volunteers who had the tedious task of gluing the cold stones Annanack gathered in west Montreal into Inuksuit.

“It was challenging, but we had fun. In the beginning, the glue kept freezing and wouldn’t stick. When the rocks got room temperature, it got better and better,” Etorolopiaq said.

Usually Etorolopiaq carves more human-like figures at the Native Friendship Centre. But he put aside some time last week to help with the project.

“They told me it was for missing and murdered Indigenous women. That’s why I became involved,” Etorolopiaq said.

To see a close-up of the inuksuit, check out Rachel Deutsch’s YouTube video here: