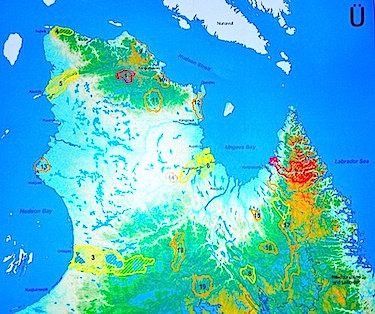 This map of Nunavik shows orange areas designated as protected, based on proposals from Quebec. Areas outlined in red are current provincial parks, while yellow areas are park projects. Nunavimmiut are now mulling over which of their lands and waterways to protect from industrial development under Quebec’s Plan Nord. (HANDOUT IMAGE)

KUUJJUAQ — People in Nunavik say they want balance between environmental protection and industrial development, with some areas, such as the Nastapoka River watershed, preserved always from hydro-electric and mining projects, delegates said this past week at a Kativik Regional Government council meeting in Kuujjuaq

Quebec’s Tursujuq park project should protect the lands and waters around the Richmond Gulf, known for its striking cliffs and rich wildlife, said Davidee Sappa, the Kativik Regional Government’s regional councillor for Umiujaq.

The proposed Tursujuq park, an area that includes the Nastapoka river, has been eyed by Hydro Quebec for many years for its hydro-power potential.

The Nastapoka River, whose development was mentioned in the 2001 Sanarrutik deal on economic development signed between Nunavik and Quebec, could produce up to 1,000 megawatts of power, enough to meet the daily needs of about 250,000 homes.

But many Nunavimmiut now want to prevent that from happening.

And the KRG continues to negotiate the boundaries of Tursujuq park with Quebec, hoping to include the entire Nastapoka River watershed.

The park’s current borders include only part of the river’s headwaters, but the KRG wants to enlarged the boundaries, to protect the river’s population of landlocked salmon, the only salmon to be found on eastern Hudson Bay and a rare population of freshwater seals.

The issue of which parts of Nunavik to protect and which ones to open has become critical since last May’s launch of Plan Nord.

As part of Plan Nord, Quebec says it’s ready to set aside 12 per cent of its territory above the 49th parallel as parks, park reserves or protected areas by 2015.

By 2020, Quebec says it will designate five per cent of the region as natural land reserves.

To find out what parts of Nunavik people there want to protect, consultations have been held so far in six Nunavik communities: Quaqtaq, Kangiqsujuaq, Kangirsuk, Inukjuak and Kuujjuaraapik, Kangiqsuluajjuaq and Kuujjuaq.

“[But] not all areas proposed by Quebec [for protected areas] are of interest,” said KRG consultant Lorraine Brooke Sept. 14 at the KRG regional council meeting.

And the complexities of Plan Nord’s vow to keep 50 per cent of the province’s North from industrial development has confused many in Nunavik, Brooke said.

So the question posed to Nunavimmiut has been made easier to understand: “what we thought would be useful…. was to use the opportunity to talk to people in general and ask them if there were other areas to be protected from development, where would those areas be?”

If there was any recurrent theme in what Brooke heard, it’s that people want to protect river valleys and coastal regions.

And some suggestions made by Quebec to protect certain areas appeared to be of “no interest” to Nunavimmiut because those areas have little wildlife and aren’t used for hunting or fishing.

“Inuit are saying, ‘why not replace these areas with ones that we find more relevant?’” she said.

All the other areas proposed for protection, shown bordered in orange on a map, were acceptable, Brooke said, although people in Nunavik have already suggested many boundary changes.

When Quebec first said it intended to set up protected areas across the northern part of the province in 2008, its officials agreed to work with Makivik Corp. and the KRG to first consult Nunavimmiut about their wishes.

Nunavik now wants those areas bordered in orange to receive a form of temporary protection until the current round of consultations are over and for no protected areas to be officially set aside without the agreement of Makivik and the KRG.

Brooke will restart consultations this fall in Tasiujaq and Aupaluk. She also plans to hold a second meeting in Kuujjuaq before visiting the balance of communities which haven’t yet had a chance to say what they think about Quebec’s plans to protect parts the region from development.