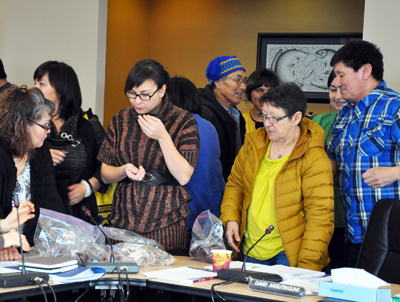 Alicia Aragutak, centre, pictured here serving as a Kativik Regional Government councillor for Umiujaq in 2013, has been acclaimed as the executive president of the newly-formed Nunavik Youth Forum. (PHOTO BY SARAH ROGERS)

The newly-formed Nunavik Youth Forum has a new set of leaders at the helm following a nomination process this past August.

The organization’s new board of directors has been filled by acclamation, including the acclamation of its new president, Alicia Aragutak, Makivik Corp. said Sept. 3.

Aragutak, who lives in Umiujaq, is a former Kativik Regional Government councillor, and currently serves as director of the nearby Parc national Tursujuq.

Louisa Yeates of Kuujjuaq has been acclaimed as the youth association’s executive vice president, while Aleashia Echalook will serve as the organization’s new secretary-treasurer.

These Nunavimmiut youth will serve as board members at large, representing different parts of the region:

• Vanessa Aragutak and Audrey Flemming for the Hudson coast.

An elder appointment will be confirmed by the Avataq Cultural Institute.

The Nunavik Youth Forum launched earlier this year under Makivik Corp. to replace the beleaguered Saputiit Youth Association which was forced to fold when it could not recover from years of financial mismanagement.

The Quebec government agreed to re-instate the association’s core funding only if it integrated under a regional organization and re-established its board of directors.

But the mandate of the new organization remains the same — to represent and advocate for Nunavimmiut aged 18 to 35 at both the regional and community levels.

The next three years are considered a transition phase for the new organization, Makivik said, in which the forum will elect members to fill staggered terms.

In their first term, different board members will serve one and two-year terms. Once those positions go up for election again, they will become three-year terms.