“A strong desire to excel and the true spirit of friendship” 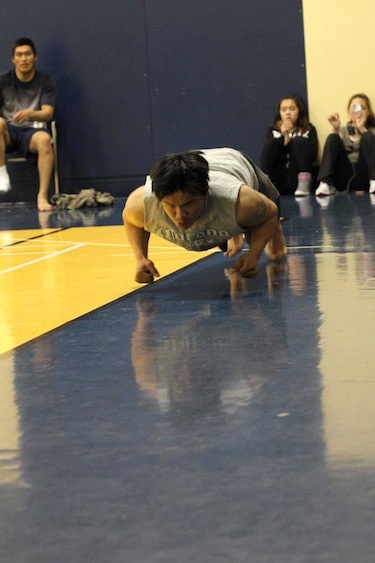 A competitor in this past weekend’s Ungava Bay Arctic Winter Games trials in Kangiqsualujjuaq shows off his expertise in the knuckle-hop. (PHOTO COURTESY OF THE KRG)

More than 100 young athletes from Nunavik’s Ungava Bay coast gathered in Kangiqsualujjuaq April 26 to April 29 to take part in trials for Team Nunavik–Québec.

Competitions took place over the weekend in Arctic sports, Dene games, snowshoeing, badminton and table tennis, which were capped off April 28 with a feast organized by the community, followed by a closing ceremony featuring cultural performances.

“These young athletes have demonstrated a strong desire to excel and the true spirit of friendship throughout the past few days. Kangiqsualujjuamiut are very proud to have been a part of this amazing event,” Hilda Snowball, mayor of Kangiqsualujjuaq, said in an April 29 news release from the Kativik Regional Government.

Community tryouts began in 2012 and more regional trials are planned for this fall.

Athletes are evaluated on their performance, time devoted to training, as well as overall behaviour and attitude.

Regional trial selections will take place this summer following the completion of the other coastal trials.

The KRG’s recreation department is responsible for coordinating the preparations of Team Nunavik–Québec for the AWG and its participation at the event.