“Where I come from really factors in” 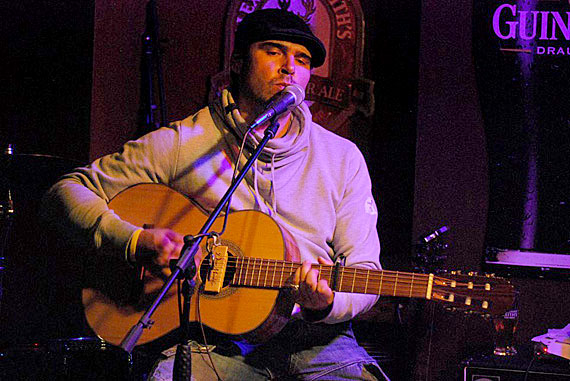 Musical talent might run in the family, but that doesn’t mean it came naturally to Jaaji Uppik.

Growing up in the Nunavik community of Quaqtaq, Uppik was surrounded by his mandolin-playing grandfather, song-writing uncles and cousin Beatrice Deer, who has carved out a musical career of her own.

But Uppik said his own guitar stay mounted on the wall in his home for years while he pursued other interests.

Uppik, then known as under the anglicized name George Okpik, worked with the Kativik Regional Police Force for 12 years while he raised his family.

In more recent years, Uppik relocated to the Montreal area. That’s where he started picking up his guitar more often, usually to entertain his kids.

But his southern surroundings have sparked memories of the North — that’s what inspired the song Nunaga or “my home” that Uppik recently wrote and recorded in Inuktitut.

“I just winged this song on the mandolin,” Uppik said, “and all of a sudden, I had 19,000 hits on Soundcloud. It really just blew up over the last five months of so.”

Like many young and upcoming artists in Nunavik and Nunavut, Uppik’s new-found success occurred within the Arctic’s relatively small social media community, eager to hear the Inuit language set to music.

Because it’s become easier to share songs through cyberspace, Uppik hasn’t had to invest too much in his craft. He recently recorded an album of 21 tracks, called Aulajivunga or “I remember,” using his Android phone and a video-camera.

The tracks have both a folk and pop ballad feel that come from the strumming of Uppik’s guitar and mandolin and his lullaby-quality vocals and harmony in English and Inuktitut, as well as in French.

“A lot of my song seem to be looking back at my kids growing up, other family — where I come from really factors in,” said the 36-year-old Inuk, who is also part Mohawk.

The vast majority of Uppik’s songs are his, although he’s dabbled in a few covers. Uppik spent five hours translating and then recording a heartfelt version of Leonard Cohen’s Hallelujah in Inuktitut.

The Avataq Cultural Institute has given him a grant to help put together his next album — he’s already putting the finishing touches on a new song in support of the Inuit seal hunt to post on the Ellen Degeneres Facebook page.

“Our skin, nothing is wasted,” he sings in Inuktitut. “Our food, it’s so tasty.”

Now, Uppik is prepared to focus on music more than in the past, although he’s unsure where this might go.

His summer is starting to fill up with gigs, include first time appearance on stage this summer at the Alianait arts festival in Iqaluit.

“It would be nice to sit and let fame pay the bills,” he jokes. “If it comes, it comes.

“But I mostly play music for my kids, they’re my biggest fans.”

Uppik is entered in CBC’s Searchlight competition, which features independent artists from across the country. You can vote for his work here.

You can hear more of Uppik’s music on his Soundcloud page.