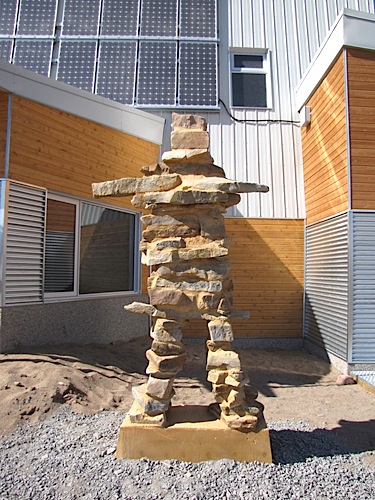 The new community science centre in Kuujjuaraapik-Whapmagoostui incorporates elements from Cree and Inuit traditional culture, including this inuksuk which stands at the building’s entrance. (PHOTO COUTRESY OF FGMDA) 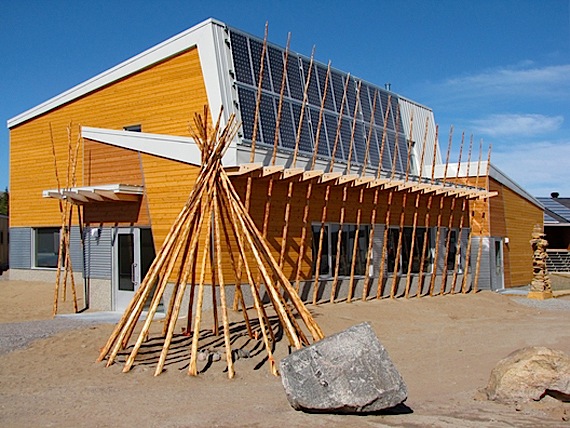 The poles lined up across the front of the new community science centre in the twin communities of Kuujjuaraapik and Whapmagoostui reflect those of a deconstructed tipi. These poles are actually pipes called thermosiphons, which keep the ground frozen under the building and evacuate heat. (PHOTO COURTESY OF FGMDA)

People from Kuujjuaraapik and Whapmagoostui and visiting researchers should feel right at home in their new community science centre, says the buildings’s lead architect.

That’s because its design kept the needs of the twin Inuit and Cree communities and scientists in mind: the ground floor is large enough for a permanent exhibit on the area’s cultural and scientific history, while there’s also ample room for researchers to work and stay upstairs.

“It’s a very different approach. Tellingly, it’s called a community science centre,” said architect Alain Fournier of the Montreal-based firm Fournier, Gersovitz, Moss, Drolet and associates. “It really shows the intention they had for the station to be not just another place where scientists hide away and do their research, and then leave.”

During consultations in Kuujjuaraapik and Whapmagoostui on the future centre, Fournier discovered that people called researchers “tent people” because they usually set up tents outside the community to work and live in.

Fournier wanted the new building to end the researchers’ isolation and, at the same time, belong to the communities, Kuujjuaraapik with 600 Inuit, and Whapmagoostui with 800 Crees.

The centre now stands in the middle of a semi-circle of seven smaller buildings from the 1980s, which will still be used by researchers.

Outside, an inuksuk and the frame of a tipi reflect the two cultures of the Great Whale River communities.

The poles, lined up across the front of the building, are supposed to look like a “deconstructed tipi.”

These poles are actually pipes called thermosiphons, which keep the ground frozen under the building and evacuate heat.

The pipes will also provide a passive cooling system to the building during summer.

Using the pipes as part of the design is an attempt to show how traditional culture can look modern, Fournier said.

The open ground floor features a floor of dark slate, which absorbs the sun through the building’s south-facing windows.

Its other energy-saving features include solar panels along one outside wall.

For landscaping, visiting researchers have also begun to put local plants around the station.

Its architects are currently working on new airport terminals for Puvirnituq and Ivujivik.

Fournier said he also hopes to play a role in the design for Cambridge Bay’s future High Arctic Research Station, for which the federal government recently published a Request for Proposal for the $81-million centre, slated to open in 2017.