Nickel mine site hopes to cut back on diesel dependance 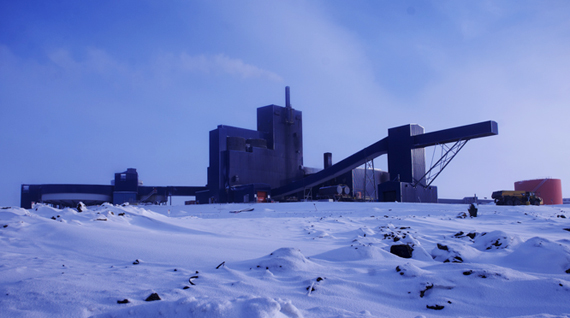 Nunavik’s Raglan mine site, located between the communities of Salluit and Kangiqsujuaq, is in the preliminary stages of designing a wind turbine park at the site which would be in operation by 2015. (PHOTO COURTESY OF XSTRATA)

Nunavik’s Xstrata’s Raglan mine hopes the alternative to its diesel dependance may be blowing in the wind.

The nickel mine, located between the communities of Salluit and Kangiqsujuaq, is in the preliminary stages of designing a wind turbine park at the site which would be operation by 2015.

That would help cut down on the 35 million litres of diesel guzzled by generators that power that remote mine site, said Xstrata spokeswoman Céliane Dorval.

“Right now, the whole Raglan mine site is powered exclusively on diesel, which means very high production costs,” Dorval said. “We also want to reduce our dependence on diesel in the long run.

“The use of wind power would reduce our emissions of greenhouse gases and allow us to obtain energy at a lower cost.”

To do that, the mining company wants to install enough turbines to yield six megawatts of power. That would meet about 30 per cent of the mine’s power needs when the wind turbines operate at full capacity, Dorval said.

Those energy needs will likely continue to rise, as Xstrata moves to expand the Nunavik mining complex this year.

The company announced last summer its plans to sink more than $500 million in the new Qakimajurq mine and extend the depth of its Mine 2.

That’s on top of major construction to its accommodations complex that will up the number of rooms to more than 860.

Those projects will increase nickel concentrate production to 32,000 tonnes a year by 2014, while maintaining the plant’s production at 1.3 million tonnes of ore a year.

But the wind project is still far from getting the green light, Dorval says, while Xstrata pursues government permits and corporate approval.

Xstrata has provided a project notice to Quebec’s department of the environment, who must approve a permit for a wind farm.

The mining company must also gather data on wind speeds at different locations in the region, to determine if and what kind of turbines would be viable at the mine site.

Quebec’s Plan Nord has committed to study different types of renewable energy sources in Nunavik, including wind turbines and underwater generators, to help wean the region of polluting diesel.

Hydro Quebec is mulling over how it can supply electricity to the huge iron mine near Aupaluk, slated to start operations as early as 2016.

A 400-MW hydro-electric project — enough to power 400,000 households — would be required to feed the mine complex.

The source of this electricity could flow from some 600 kilometres to the south, from hydroelectric projects there, and from one or two future dam projects along the Ungava coast, possibly on the nearby Leaf River.

Xstrata says wind is the only renewable energy source it has explored at this point, while Dorval says the company has had no word on whether the mine would be eligible for any subsidies through the Plan Nord.